A group of individuals clustering or bunching together a tight defensive circle, typically with the young in the center while the adults face outwards toward the source of the perceived threat, like the spokes of a wheel.

Bunching may be observed in response to any situation that is frightening, potentially dangerous or perceived as a potential threat, whether caused by other elephants, predators (including people) or strange sounds, smells or events. Bunching may precede a Retreat-From, Full-Retreat, Panic-Running, Advance-Toward, Group-Advance, Charge or Group-Charge. Elephants may exhibit a combination of Vigilant and Coalition-Building behaviors such as Listening, Ear-Spreading, Periscope-Trunk, Head-Swinging, Reach-Touch and Rumbling. Temporin may be secreted.

Little E is 5 days old and is trying to suckle as his mother browses. Adolescent female V-notch approaches and we hear what sounds like a Little-Greeting Rumble from Mama Little E. There is a lot of wind noise so it is hard to tell if both vocalise, but V-Notches holds her Ears-Stiff and Backs-Toward Mama Little E. We see Lorato approaching from behind them and see Mara Little E rumble again. They all Bunch around around Little-E in a protective manner. (Maasai Mara, Kenya)

We are with the Mabenzi family. A sub group of 7 elephants including young adult tuskless female gf0014 and gf0079, their calves and two juvenile/young males discover our tire tracks. We had driven through the grass here at least 35 minutes earlier. At least 6 of these elephants repeatedly Sniff the tracks and then eventually Back-Away and seek assistance from large adult tuskless female Mwana Nzo - they coalesce around her and Valente.

Mwana Nzo understands by their Chin-Up posture that something is wrong and she moves from the center to the fore of this Bunched group and Stand-Tall with adult female Valente (with tusks). They lead the tightly Bunched family over to inspect the tracks. Mwana Nzo inspects the tracks; she Stands-Tall looking at Kate’s/Greg’s car x 2 and then sniffs again and decides, correctly, that it is us - she turns on us Standing-Tall and then begins a what looks like a Charge, but is only a Bow-Neck-Advance-Toward. She reconsiders and begins to Back-Away and Touch-Ground. She turns and leads the Bunched family in a Full-Retreat and adopts the Rear-Guard. (Gorongosa, Mozambique)

This clip is taken from a longer sequence of behavior by the I and C families, who we find out in the open where they feel vulnerable. Prior to the start of this clip the I family had Charged us with Trumpet-Blasts and other commotion and alerted the C family, who were about 200 meters from them. As the I family stand facing us Bunching, Standing-Tall and Head-Swinging, the camera pans out to reveal the C family rushing toward the I family. The C family joins the I family with a lot of vocal commotion and they Bunch together in one group. (Gorongosa, Mozambique) 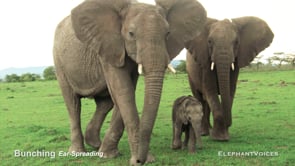 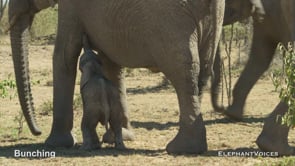 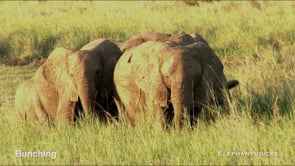 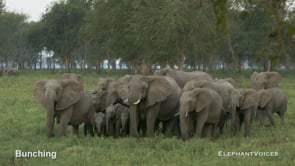 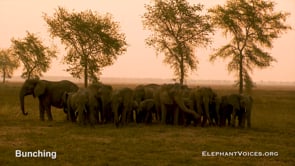