The use of chemical or olfactory cues is central to communication between elephants. Elephants often raise their trunks up to sniff scents carried in the air, or use the tips of their trunks to explore the ground (especially urine spots, urine trails and fecal matter) as well as to sniff the genitals, temporal glands, or mouths of other elephants. Chemical communication provides an energetically efficient and long-lasting signal. 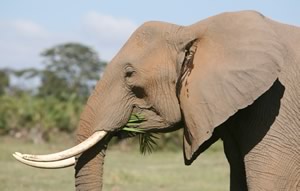 Sources of odours used in chemical communication between elephants include urine, faeces, saliva and secretions from the temporal gland, a large multi-lobed sac with an orifice mid-way between the ear and eye.

Elephants have a keen sense of smell 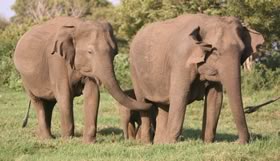 and just as we use our sight an elephant makes use of her sense of smell constantly. When we want to learn more about what an elephant is thinking or where her attention is directed, we look not at her gaze (as we would with a person), but at the tip of her trunk. The tip of the trunk is always on the move, turning this way and that, up and down, forward and backward taking in new smells, searching for more information and, 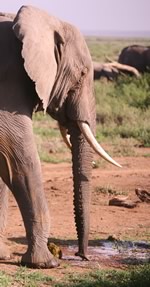 we believe, mirroring the focus of her mind. We once watched an elephant return to our car from 50 meters away to locate a tiny piece of discarded overripe banana that was no more than half a centimeter in diameter.

An elephant's sense of smell is so keen that in Amboseli, where elephants are occasionally speared by Maasai moran (warriors), we have observed them run from Maasai who were two kilometers away, and also run from a vehicle that had carried a group of moran the day before.

Lucy Bates and colleagues have shown experimentally that elephants are able to discriminate between different groups of people representing different levels of threat through the sense of smell alone. Elephants ran further and remained alert for longer when T-shirts were worn by Maasai than when worn by other ethnic groups who do not represent a threat.

We also observed the elephant, Virginia, give a loud contact call after being presented with urine soaked soil from her daughter Vida, when Vida had been separated from the family for two days. Experimental work by Lucy Bates and colleagues has shown that elephants are able to use their sense of smell to keep track of the locations of individual associates.

African Elephants have the highest number of genes dedicated to smell among mammals, twice the number of smell genes as dogs and five times more than humans. They have around 2,000 genes alone that are dedicated to scent.

The trunk is a fusion of nose and upper lip and is made up of approximately 150,000 sub-units of muscles. Although the trunk serves an obvious role in the acquisition of food and water, it is also extremely important for tactile investigation of the environment, olfaction and vomerolfaction. The tip of the trunk houses two types of vibrissal hairs, small corpuscles and free nerve endings. These features allow the trunk tip to detect vibrations, finely manipulate objects and transfer liquids. 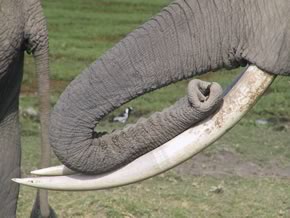 Within the nasal cavity are seven turbinals (dogs have only five), scrolls of bones with sensitive tissues specialized for olfaction and hormone detection. These turbinates contain millions of olfactory receptor cells. When a male is in musth, or a female is in estrus, elephants can detect hormones or chemical molecules in the urine, feces, and in secretions from the temporal glands, trunk, and mouth that mirror the individual's physiological state.

An elephant may be able to gain enough information simply by sniffing, if not the elephant will collect the substance on the tip of trunk. Once collected on the trunk this chemical information is passed on to the Jacobson's or vomeronasal organ on the roof of the mouth for further analysis. This type of behavior is known as the flehmen response. Information thus gained is then conveyed to the brain. In front of the Jacobson's organ is a tiny row of pores known as palatal pits. These pores may also serve to enhance chemical communication by deciphering molecular information brought to the trunk for inspection.

Sometimes an elephant may be seen to flatten the tip of the trunk over a spot of urine on the ground forming a seal over the material of interest. The elephant then may then inhale and then blow on the substance, presumably warming it so that more volatile compounds will be released from the liquid matrix.