A Rumbling greeting exchange between members of an elephant family in which one (usually older and female) approaches another (usually younger, in parallel and from behind). Typically, the approaching elephant gives a Little-Greeting-Rumble and the elephant being approached, responds by Head-Raising, Ear-Lifting and sometimes Backing-Towards the approaching elephant and gives a Little-Greeting-Rumble in return. Often both individuals engage in Head-Raising and Ear-Lifting and may Social-Rub and Ear-Brush against one another, or otherwise touch one another or greet Trunk-to-Mouth. Both are likely to secrete Temporin. This Little-Greeting interchange is a relatively frequent event in an elephant family.

Little-Greetings may occur between any member of an elephant family, including between two males, but they are most commonly heard between females. Little-Greetings occur more often between mother-daughter, sister-sister, grandmother-granddaughter pairs than expected by chance, and less often between aunt-niece, great-grandmother-great-granddaughter or pairs who were second cousins. Yet, some aunt-niece pairs show a high frequency of Little-Greeting exchanges. In each case these are pairs in which the niece was an infant prior to the aunt having her first calf, and the aunt was the most likely candidate in the family for taking the role of allomother. Calves and their caretakers (often sisters and aunts) emit Coo-Rumble/As-Touched-Rumble exchanges under rather similar circumstances to Little-Greeting-Rumble exchanges and we believe that the Coo-Rumble/As-Touched-Rumble probably develops into a Little-Greeting relationship.

We venture to propose that the relationships established through early vocal and tactile care-giving by mothers, sisters and other allomothers form the basis of close bonds observed as adults which are then strengthened and reinforced through the customary Little-Greetings between closely bonded pairs.

We are with the Mabenzi family. Matriarch, Provocadora, gf0012, stands facing us and gf0020 reaches out Trunk-to-Mouth and gives her a Little-Greeting, Head-Raising and Ear-Lifting and vocalizing with a Little-Greeting-Rumble. (Gorongosa, Mozambique)

Jacinta approaches her niece, Jolie, who is coming into estrus and appears to be Waiting. Jolie reaches out to Jacinta Trunk-to-Mouth, Ear-Lifts (with slight Ear-Folding) and gives a Little-Greeting-Rumble. Jacinta walks on. (Amboseli, Kenya)

Noyeau is standing with her newborn when she is approached by Nabila who reaches out to greet her Trunk-to-Mouth. One of them Snorts and Noyeau Rumbles, Head-Raising and Ear-Lifting. There is no Rumble by Nabila. (Amboseli, Kenya) 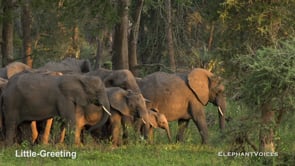 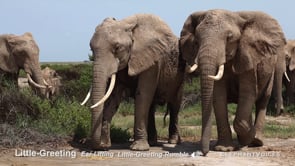 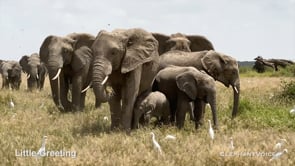