The young male has just tested (Trunk-to-Genitals) a female. Then, as this clip begins he turns and threatens another female and Supplants her at a tree she was feeding on. He (right) starts his threat with slight Ear-Flap-Slide, Advancing-Toward her Ear-Folding at her while he Reaches-High and touches her tusk. The female (left), likewise Advances-Toward him with Head-High and Ears-Folded. She Forward-Trunk-Swings at him. After the clip ends she Backs-Away and then Orients-Away and Retreat-From. (Maasai Mara, Kenya)

Tee-Jay and Gordon, both in musth, have been engaged in an Escalated-Contest. But when Paolo, also in musth, appears they turn to look at him in anticipation. When Paolo is about 50 m away both males turn to face him, Waiting for him with some visible apprehension. Gordon is Foot-Lifting and holds his trunk under. Paolo walks toward them with Head-High, Chin-In in a very dominant posture while Tee-Jay's bravado has changed and he Waits for Paolo with Trunk-Toward and his chin further out than earlier. Paolo continues to Advance-Toward them and at about 3 m Tee-Jay Backs-Away. Both males reach Periscope-Trunks toward Paolo and Retreat-From. Paolo's arrival breaks up the fight, whether purposefully or not. (Amboseli, Kenya)

A medium sized male has just been displaced by this musth male who is testing Angelina. She has just given birth and he is assessing what her reproductive state is. We see him Flehmen and even Push against her almost as if he might Drive her. He Ear-Folds repeatedly at the medium sized male who stands a little distance away watching. At one point we see him draw himself up in a real Head-High, Chin-In musth posture and he does a little "Kick-Dust" as the other male. (Amboseli, Kenya) 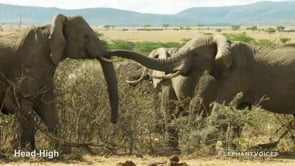 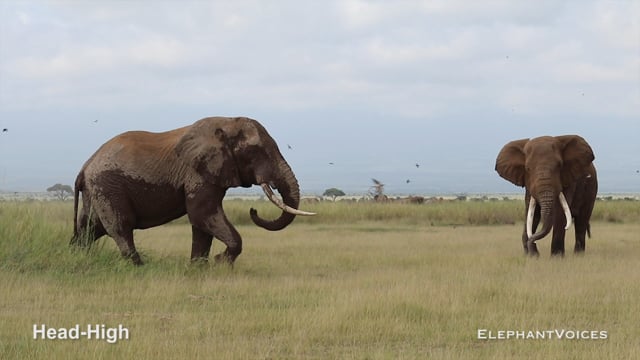 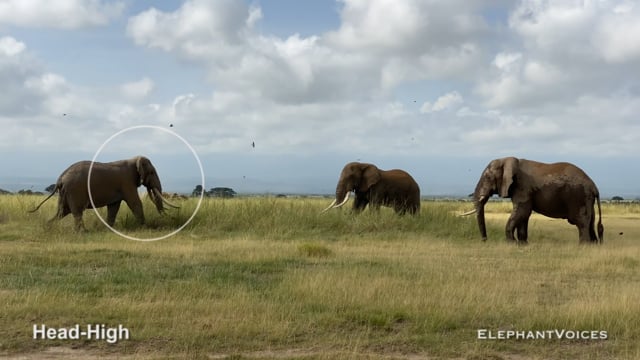 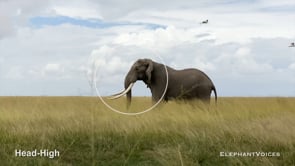 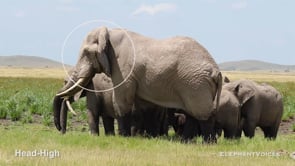