As the role of elephants as beasts of burden declined, people sought to put them to other work instead. In recent years the use of elephants in tourism has become an industry in itself. Elephant-backed safaris, elephant polo, elephant football, elephant painting, elephant orchestras, elephant orphanages, elephant begging have each become popular sight-seeing activities and/or destinations for foreign visitors. While some of these activities provide a source of income to care for needy elephants, others are exploitative and mask cruel realities.

Elephant-back safaris have been so popular in Asia that there has been strong incentive to expand to Africa. South Africa, Botswana and Zimbabwe all have a so-called "Elephant Industry" supported by captured elephants who have been put to work carrying tourists. These elephants have been violently abducted from their families and often brutally trained for this purpose. To persuade an elephant to work - including to carry tourists - a mahout must ensure that it follows instructions at all times. This, by necessity, means breaking down an elephant's independent will. To do so, calves are chained, beaten, deprived of social interaction. It is an ugly truth - you read more about it on this page. 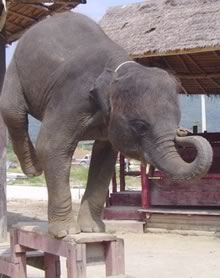 Eco-tourism? We call foul! Think about what you are promoting before you book a safari. The practice of capture has now been outlawed in South Africa, though elephant-back safaris persist there and in other countries.

There are many good and caring people who are working to give these once loyal servants a better life. The sanctuaries and reserves set up for retired working elephants are primarily located in Asia, but as the practice of captive exploitation of elephants expands to Africa, the need for elephant refuges is growing there, too.

ElephantVoices' standpoint is that the training of elephants for commercial gain should be prohibited.