For years naturalists have written about the behavior of elephants without realizing they were contributing to the beginnings of a foundation of knowledge about their visual communication. Many of these descriptions are part of popular language. For instance, people talk about an angry elephant "charging", "flapping its ears", "kicking up dust" or "tossing its trunk." In the course of their research early elephant ethologists, too, wrote about specific displays using words such as "the musth walk", "standing tall" or "trunk curling," to name but a few. 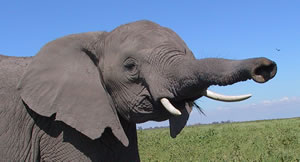 So how do elephants send visual signals? The answer in its simplest form is that they use their heads, eyes, mouth, ears, tusks, trunk, tail, feet and even their whole body to signal messages to one another and to other species. For example, a threatening or dominant elephant

signals her status by trying to appear larger, carrying her head high above her shoulders, spreading her ears, climbing up a termite mound, while a subordinate elephant carries his head low and his ears back. An elephant who is fearful  raises her tail and lifts her chin. A socially aroused elephant raises tail and her head, and lifts and rapidly flaps her ears. 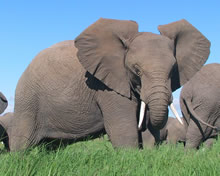 But we would be doing a disservice to the complexity of elephant communication to try to summarize visual displays and gestures in a few paragraphs. We recommend, instead, that you try using the Search Portal on The Elephant Ethogram to look for Behaviors that are involved in visual communication. In the Combined Dropdown Search under Communication Mode, select "Visual". If you are interested in visual signals that involve particular parts of the body, select those from Active Body Part. So for example, selecting both "Visual" and "Ears" will return all of the Behaviors that use the ears in visual communication. Or try the same by selecting Trunk, Forefeet, Hindfeet, Tusks or Tail. Or, if you are interested in how elephants visually signal aggression, sexual interest, playful interaction or friendly concern try adding a Context to your selections.

To use visual communication means that elephants must make use of their vision. The eyesight of elephants is said to be good in dull light, but considerably reduced in bright light then reaching a maximum range of 46 m. From personal experience, however, we have found elephants to be rather selective observers, sometimes showing relatively good visual acuity and other times rather poor. Once when Joyce was observing a group of very wary elephants 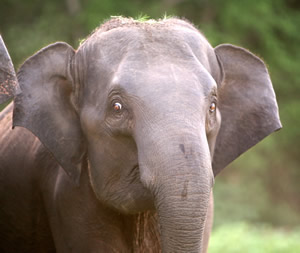 she parked her vehicle on an open hillside some two kilometers from them (unbeknownst to them) and allowed them to walk towards her. They approached to less than 15 m before they saw her, whereupon they fled in panic.

Elephants seem to be able to see silhouettes very well, but are less good at picking out an object against a background. In Amboseli where the elephants are very habituated to cars, but are occasionally killed by people on foot, they can become quite alarmed at the sight of a human silhouette. We can, however, stand within a few meters of a group of elephants, with the car as a backdrop and they do not appear to "see" us. This does not mean that they do not know that we are out of the car, however. If we lie down under the car the position of the elephants' trunks as they walk past the car indicates very clearly that they know exactly where we are! 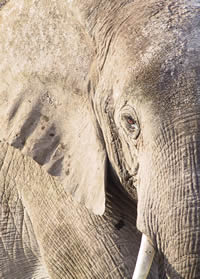 We have also noticed that elephants are sensitive to movement and they seem to be especially cued to the way people (and presumably other predators) move. Walking with a normal gait in front of a group of elephants will immediately attract their attention and they will raise their heads in alarm. We can, however, move past or up close to a group of elephants without attracting their attention by adopting a bent-over posture and moving extremely slowly, freezing each time our movement is noticed.

While it seems that elephants do not have very good visual accuity, they see some things clearly that we see only with difficulty! For example, when an elephant seriously threatens another she will fold the lower portion of her ear back creating what we call an earfold. To our human eyes this posture is rather subtle and it took almost eight years of observing elephants in Amboseli before we noticed Ear-Folding. We once watched two musth males face off with 50 meters between them. Each time the higher-ranking male Ear-Folded the subordinate male looked or backed away. Clearly the subordinate male could see the higher ranking male Ear-Folding where we had difficulty seeing the threat from the same distance without our binoculars.

With their eyes located on the sides of their heads, elephant have very good peripheral vision. Each eye takes in 190o (123o uniocular and 67o binocular vision). It takes energy for an elephant to make a a 180o but by pressing an ear close to its body an elephant is easily able to see what is behind it and Look-Back is a frequently used Behavior.