Collaboration and networking is fundamental to achieving the goals of ElephantVoices. Our web of colleagues, like the social network of elephants, extends far and wide across countries and continents. Even though our formal team is small - the big circle of individuals and institutions that we regularly team up with is far-reaching. ElephantVoices couldn't operate effectively without them, which is why this short introduction is included on this page. We thank all our collaborators, including those from the earliest days, for the discoveries and achievements made possible by working together. A special thank you to all those we continue to work with in Amboseli and Maasai Mara, Kenya, and in Gorongosa National Park in Mozambique, where we have spent most of our field time over the years.

Joyce Poole is Co-Founder and Co-Director of ElephantVoices. She has a Ph.D. in elephant behavior from Cambridge University, and has studied the social behavior and communication of elephants for over 40 years, dedicating her life to their conservation and welfare. Her contributions to science include the discovery of musth in male African elephants, the description of the contextual use of elephant vocalizations, including those below the level of human hearing, and the discovery of vocal imitation.

Her finding that ivory poaching destroys the fabric of elephant society was instrumental to the decision to ban the international trade in ivory in 1989. Her understanding of male elephant behavior, and the importance of social learning and role models in elephant society have been key to the adoption of more humane elephant management practices. Joyce has written two books, numerous scientific papers and popular articles on the subject of elephant behavior and conservation, and has participated in scores of media projects. At the bottom of this page you can watch an animation with Joyce talking about her life passion, elephants, published on Nautilus 6 October 2016.

Petter Granli is an economist with broad experience from corporate level management and marketing, and is Co-Founder, President and President and Chief Executive Officer of ElephantVoices. He has worked for many years as a management consultant with special focus on leadership, teambuilding, marketing, and communication. He has extensive experience in different trades as board Chairman or member. Petter was one of the founders of, and headed the Norwegian ecotourism company Basecamp Explorer AS from 1998 to 2001. During that time he initiated the Maasai Mara Cheetah Conservation Project and several eco-friendly, collaborative projects involving the Maasai.

Thomas Stafford joined ElephantVoices as Video Producer in early November 2017, after earlier in the year working on a three month internship. His job is focused on ElephantVoices ongoing comprehensive documentation of the repertoire of elephant behavior, a groundbreaking project that will be completed in December 2018. Tom has a degree in Digital Media Design, specialising in film from Falmouth University, Cornwall, UK.  For his final project at university he directed his own film, for which he was awarded a first. 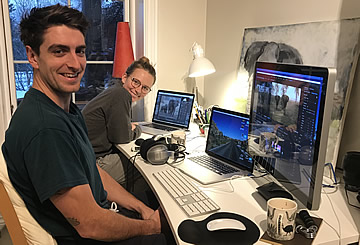 Tom has always had a passion for documentary photography and filmmaking. He spends his free time outside exploring and photographing nature, and wants his photography and future films to make a difference. Tom grew up in the English countryside of Northern England. He had an infatuation with nature and animals from an early age from being surrounded by numerous household creatures which included dogs, goats, chickens and horses.

Selengei Poole-Granli is engaged as Social Media Manager from mid October 2017 to end 2018. With a passion for music, Selengei studied Popular Music at Falmouth University. As part of her degree she gained experience interning at Red Light Management in Los Angeles, the largest music management company in the world. After graduating in 2015 she received a Falmouth Internship Award to work in Marketing for Universal Music Group in London.

Selengei was born and raised in Kenya, and, as Joyce and Petter’s daughter, spent much of her childhood in Amboseli National Park watching elephants while her parents documented their behaviour and recorded their voices. Selengei has always had a deep love and understanding of animals, especially elephants and is passionate about animal protection and welfare. When she was just four years old, she announced that she had been placed on this earth to save all the animals.