A female at the back of a group of elephants in Full-Retreat, placing herself between her family and the perceived threat. The female carries her Ears-Stiff, her Chin-Up, and her Trunk-Curved-Under. As she retreats, she Looks-Back over her shoulder at the perceived threat or turns, threateningly, to face it. While this Chin-Up, Looking-Back posture indicates an Apprehensive, fearful elephant, a wrong move may provoke an attack.

We have just had a Group-Charge led by gf0073 as well as a second very serious Charge by her. After a long interaction with us gf0073 follows her family back to the forest taking up the Rear-Guard. She Backs-Away and then walks back with Chin-Up and Trunk-Curled-Under. She turns to face us and Head-Shakes and Stands-Tall.

There is rumbling going on in the background. gf0073 stands on edge of the forest with others behind her and begins to throw dust - in Displacement-Grooming. And then adopts a Periscope-Trunk. (Gorongosa, Mozambique)

Mwana Nzo has just moved up smartly to sniff the scent of our tire tracks. She sniffs and then Stands-Tall looking at Kate’s/Greg’s car x 2 and then sniffs again and decides, correctly, that the tracks are ours.

As the clip begins she turns on us Standing-Tall and then begins a what looks like a Charge but is only a few steps in a Bow-Neck-Advance and then she Kicks-Dust. She reconsiders and begins Backing-Away and does a Touch-Ground. She turns and leads a Full-Retreat and adopts the Rear-Guard, Standing-Tall and turning to Look-Back. (Gorongosa, Mozambique)

The context: Little E is 16 days old. His family was trying to get across a rocky river bed when his mother, Mama Little E, slipped and fell and landed on Little E. Little E roared, someone snorted and others rumbled. Females in the family whirled around and engaged in a number of defensive behaviors including: Redirected-Aggression, Standing-Tall, Kick-Dust, Foot-Scuffing, and Head-Dip-Touch-Ground as they defended and reassured the infant.

This clip begins as they continue across the river. There are jackals in the river bed and they cause Lorato concern. She has adopted the Rear-Guard position and posture walking behind the infant, touching him with her trunk. She is Tail-Raising and holds her Chin-Up and Ears-Stiff as she turns to Look-Back, first to the right side, then to the left and back again to the right. (Maasai Mara, Kenya)

The Mabenzi family are Bunching as they walk in a Group-March. They are on their way to water and were caught out the open and are concerned.

Note that at the same moment that Mwana Nzo, gf0016, Orients-Toward us and lifts her trunk in a Trunk-Sweep movement (behind Valente), Valente,gf0013, too, Orient-Toward us, and others follow her in synchrony as they all face us. Valente searches for Mwana Nzo reaching her trunk out towards her in what appears to be an attempted Reach-Touch - as if in solidarity. Then Mwana Nzo come to the fore and the main females lead the entire group toward the camera in a broad front in solidarity. Then all turn again with Mwana Nzo taking on Rear-Guard. (Gorongosa, Mozambique)

The C family is crossing Picada 4 in a Procession. Nomada, gf0003, brings up the Rear-Guard turning to Orient-Toward us and Look-Back with Ears-Stiff. (Gorongosa, Mozambique)

The Mabenzi family Bunching as they walk in Group-March. They are on their way to water and were caught out the open and are concerned. Provocadora, the presumed matriarch, pauses to urinate and others turn around. The lack of forward movement by the matriarch and other lead females at the back causes the entire group to stop. Provocadora turns to face the presumed threat and Standing-Tall, adopting the role of Rear-Guard. The others stop to wait for her. The family is impatient to go, though, and they all begin to move again. (Gorongosa, Mozambique) 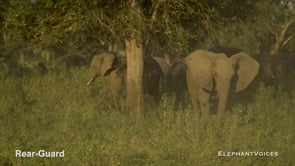 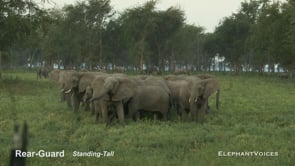 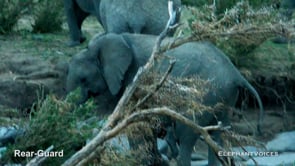 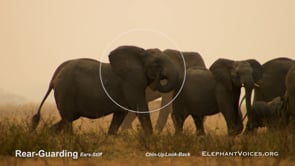 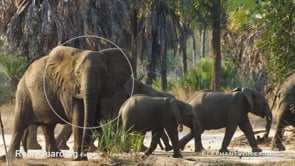 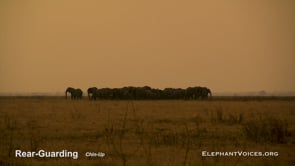