Elephants learn from others

The cohesive structure of the family serves as a defense against predators as well as providing a social environment in which young elephants can mature and learn. Young elephants learn normal behavior in a social context, and learning from others, or social learning, plays a crucial role in their development. 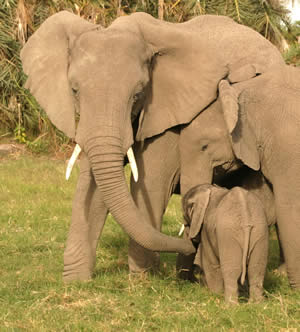 Calves follow their mothers' responses to learn who are their relatives and friends, and who represent potential threats. They rely on their social companions to learn appropriate behavioral responses to others. Calves gradually acquire foraging knowledge by sampling what the adults around them are eating, and they practice their mothering skills by associating with and following the behavior of mothers of newborn calves.

In Tsavo East National Park, Kenya, where orphan elephants from The David Sheldrick Wildlife Trust were slowly released to the wild, contacts with both humans and older elephants provided information to translocated individuals about the new foods in the area, where and when to forage, and how to avoid dangers. These examples of young elephants emulating the behavior of older individuals and becoming more proficient at tool use and foraging techniques with increasing age suggest that social learning across extended periods of time is important in the development of elephant calves.

Mahouts make use of elephant social learning skills in training, using already tamed elephants as examples for young untrained elephants. The calm response of the older trained elephants initiates the process of learning that the human handler is to be obeyed and respected.

The presence of role models for social learning is an essential element in the acquisition of normal elephant behavior; in its absence, inappropriate behavior may develop, such as aggression by males toward females and calves, as has been observed in captivity, or the mounting, tusking, and killing of other animals, as has been observed in free-ranging orphaned males.

Social learning is also displayed in the acquisition of cultural practices by different elephant populations. For instance, in Amboseli, where for the last 40 years elephants occasionally have been speared by members of the Maasai community, elephants kill livestock, a trait not observed in other parts of Maasailand where the spearing of elephants is rarely practiced. Where elephants live near farmland, a culture of dismantling electric fences can spread through a population, and the among the elephants of Mt. Elgon in Kenya,  the culture of mining salt licks has formed deep caves. Stories in the press of groups of elephants in certain areas forming road blocks and raiding trucks transporting food is another example of cultural practices.

Learning how and what to eat 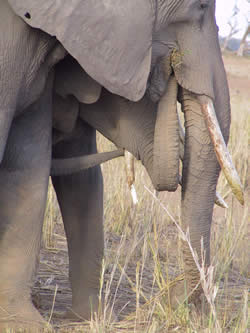 Much of what we know about elephant calf development comes from the work of Phyllis Lee. Infants initially have little control over the use of their trunks. They must practice the complex coordination of the trunk and learn to apply it to procuring appropriate foods from a specific environment. Calves start to sample their potential foods when they are one to two months old. Such sampling consists of picking up a potential food item with their trunk, rolling it in their trunk, placing it in their mouth and possibly chewing it. This form of sampling starts well before actual ingestion.

Elephant calves continue to suckle for approximately two years, during which time they gradually acquire foraging knowledge. In addition to their own sampling they may use their trunk to test what adults are eating by placing their trunk in the mouths of adults and pulling out food items. Such "stealing" of food is usually from their mother and allomothers. They may also eat the fresh dung of other elephants in order to get essential digestive bacteria and to extend food sampling through the smell in dung. Elephants have many food sources, and through such food sampling calves learn a wide range of these seasonally and geographically varying species.

Juvenile females learn vital mothering skills by taking care of the calves of other mothers, or allomothering. Contact with other calves and infants and their mothers during such care-taking provides them with an array of mothering experiences that persist until they give birth to their own first calf. In addition, the presence of allomothers increase a calf's chance of survival. 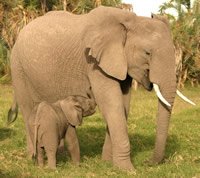 Despite this practical experience, however, first-born infants show more distress, encounter more stress and have higher mortality rates than infants born to older, experienced mothers. When an inexperienced female gives birth for the first time, experienced females come to her aid, and by their behavior help her to deal with the physical demands of birth. Other family members seem to understand that first time mothers have less experience, because these young mothers receive more help in the protection and rearing of the newborn calf than do older mothers.

Knowledge gained from experiences over a succession of births may play a major role in successful calf rearing. More experienced mothers appear to be more sensitive to calf demands for food and protection and this knowledge has obvious consequences for calf growth and survival.

Elements of female reproductive behavior, such as consort behavior, appear to require a social context for learning. Young estrous females do not demonstrate typical estrous behavior and are often chased and mounted by young and non-musth males rather than consorting with a musth male. The acquisition of more appropriate estrous behaviors, and the choice of mates, seem to be facilitated by the presence and behavior of mothers, who are often observed exhibiting estrous postures and behaviors around their first-time estrous daughters, when not in estrus themselves.

Young females appear to have to learn how to behave during estrus, through experience and by watching the behavior of older females. For instance, mothers or other close female relatives may be observed to approach or to avoid males, to run with their first-time estrous daughters during long chases, and occasionally to make post-copulatory calls after the young female is mated. The behavior of mothers and daughters during a daughter’s first estrous period indicates the importance of a social context for learning, and suggests that mother elephants may be engaged in a rudimentary form of teaching.

The process of a male’s departure from his family can be a difficult and dangerous time, taking several years. Male mortality in the 10-20 age bracket is significantly higher than in females of the same age. To survive on their own, newly independent males need sufficient social experience with other males along with knowledge of male areas of residence (called Bull Areas) and of the surrounding habitat. 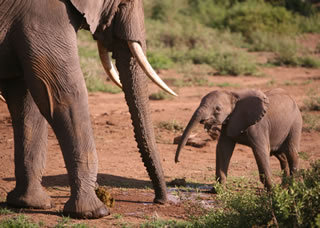 Males begin to learn some of these skills while still with their natal family. Juveniles males spend much of their time involved in exploratory and play with same sex partners outside the family, thereby socializing and bonding with their future peer group, while juvenile females appear to consolidate their relationships within the family. This form of play allows males to assess the strength of their future competition.

Young independent males often follow older musth males around, testing the same urine spots and the same females that they do. These young males can be seen observing the subtle maneuvering of older males around an estrous female as if they are learning by watching. Successful mating by males of estrous females requires considerable skill, some of which may be gained through watching the behavior of older, more experienced males. Musth males are surprisingly tolerant of these youngsters. Joyce Poole found that musth males who were guarding an estrous female would allow these young males to stand less than a meter from their mate while keeping older males at tens of meters distance.

Males also appear to have to learn to distinguish between odors. For examples, young males, though not older males, often mistake the smell of a “pre-estrous” female and even females who have just given birth for a female in true estrus. This learning process may in part be gained through watching the behavior of older more experiences males.

Learning to use and make tools

Hart et al describe the role of social learning with examples of two young elephants, ages 18 and 9 months, imitating the fly-switching behavior of adults. Adult Asian elephants modify branches by pulling off leaves and shortening sticks to create fly switches of ideal length. An 18-month-old calf was able to successfully remove a side branch and was coordinated in switching with the modified shorter branch. The 9-month-old showed uncoordinated attempts to switch effectively, but her movements appeared to imitate the fly-switching behavior of older elephants. 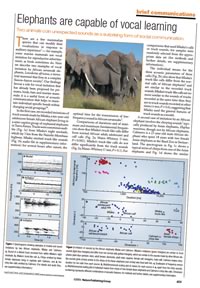 In 2005 Poole and colleagues added elephants to the short list of mammals (humans, some marine mammals and bats) that are capable of vocal learning - in other words, able to imitate sounds. They reported a young female African elephant - one of the Tsavo orphans, a female named Malaika, who had learned to imitate the sounds of distant trucks, and a captive male African elephant, named Calimero, who had been able to imitate the chirping sounds of the Asian elephants with whom he was raised. Their discovery unearthed other reports of elephants who had learned to produce unusual sounds (e.g. humming, purring, croaking, whistling).

For example, two reports described Asian elephants in a timber camp who had learned to produce whistling sounds by blowing air through their trunks, and still other elephants who have imitated this innovative whistling technique.

The Poole 2005 et al paper was published in the journal Nature, and the discovery made the headlines in media around the globe. Furthermore it prompted other people who had made similar such observations to come forward. One was an amazing case of an Asian elephant in a Korean zoo who had apparently learned to imitate the commands used by his handler - in Korean, of course! You can watch the raw footage we received from Everland Zoo in Korea here. The news from Korea was followed up by ElephantVoices colleagues, and a study of Kosiks abilities was published in the journal Current Biology in 2012. BBC covered the study with the following headline, Elephant mimics Korean with help of his trunk, while National Geographic wrote Elephant "Speaks" Like a Human - Uses Trunk to Shape Sound.