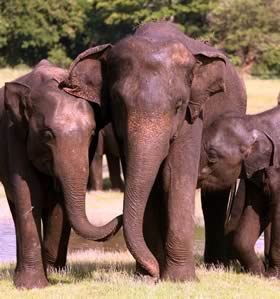 Depending upon how their tusks are employed, elephants may use them to poke another aggressively, to gently lift a baby from a mud wallow, or to express solidarity during a greeting ceremony.

Elephants often use their ears to rub against another affectionately or in play, or their tails to swat another with force or to gently check for the presence of a calf.

An elephant's trunk may be used to caress, reassure or assist a calf, to explore the genitals, mouth or temporal glands of a family member, to touch or explore the body of a dead elephant, to touch or push another in play. In more aggressive or defensive contexts an elephant may use its trunk to slap or to block, or to reach out to another for reassurance when facing a predator. In sexual contexts elephants use their trunks to explore, to test or to control the movements of another.

Elephants use their feet to explore, to aggressively or playfully kick another, to caress or assist in an affiliative situation. And an elephant may use its entire head and body to aggressively push or ram another, to rub sensuously against another in a friendly manner or to drive a female in a sexual context. 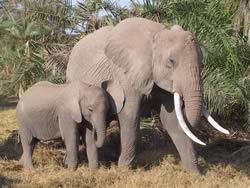 You can learn more about elephant tactile interactions using the Search Portal on The Elephant Ethogram: A Library of African Elephant Behavior. In the Combined Dropdown Search under Communication Mode, select "Tactile" to list the many Behaviors and Constellations that involve tactile communication.

When we think of our human sense of touch we think immediately of our sensitive hands. Likewise, when we imagine an elephant's sense of touch we think, first, of their prehensile trunk, for it is with the trunk that elephants most often touch others. An elephant is capable of using its trunk to perceive differences in the width of grooves as small as 0.25 of a millimeter. 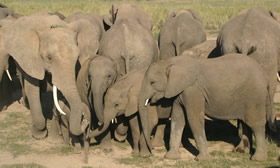 The extensive sensorimotor specializations of the trunk allow delicate manipulations of both large and small objects and contain some of the most sensitive tissue ever studied. Called Pacinian corpuscles these specialised cells can pick up minute vibrations. These corpuscles are comprised of concentric membranes of connective tissue, like the layers of an onion, with the gaps between filled by a slimy gel. Movements or vibrations deform these layers, stimulating nerve endings and sending a signal to the brain.

Pacinian corpuscles are found in other mammals too, for instance in human fingertips, but they are particularly densely packed in the elephant's trunk. Elephants' ability to detect seismic vibrations suggests that similar cells are also present in the soles of the feet. You can read some more about pacinian corpuscles here.