Elephants are important in the history, religion and culture of many countries 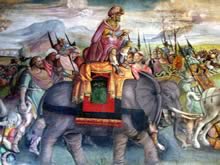 The relationship between elephants and people is, and has been, an extraordinary one. Captive elephants have an important place in the history, religion and culture of many countries, especially in Asia.

As early as 1400 BC their enormous size and power was harnessed on the battlefield and recorded in Thai history. Porus, Emperor of India, used 85 elephants to confront Alexander the Great at the Battle of Hydaspes in 326 BC.

Hannibal went through Spain, France and across the Alps with 34 African elephants in 218 BC, although most of them died. And elephants fought for the Khmer Empire in Cambodia between 800 and 1600 AD. The Belgian King Leopold II, captured and trained African elephants in the late eighteen hundreds.

The strength and intelligence of elephants has also been used by people in huge construction projects to great effect. For example, the extensive and intricate irrigation system on Sri Lanka was built up with the assistance of elephants. And prior to the development of machines, elephants played an essential role in logging and other lifting and transportation tasks.

Elephants play an important role in both Hindu and Buddhist religions. Ganesh, the Hindu elephant God, is revered as the remover of obstacles. In his teaching, the Buddha often spoke about elephants and their image and characteristics as powerful metaphors.

Incongruous as it may seem, though elephants are worshiped and held in high esteem, many are treated abysmally. For example, temple elephants, though exalted, may be chained outside places of worship in the hot sun for months on end.

The image of man and elephant working side by side can suggest a relationship of mutual respect and benefit, yet our relationship with captive and working elephants has always been an exploitative one. Although fewer and fewer Asian elephants are being recruited into the service of people, ancient attitudes stick deep; we have a long way to go to improve the lives of captive elephants.

ElephantVoices respects cultural values and traditions that have been in place for thousands of years, but we don't believe in practises that cause elephants to suffer.

ElephantVoices' standpoint is that the treatment of ceremonial and working elephants must be re-evaluated and much improved in the light of modern scientific knowledge. 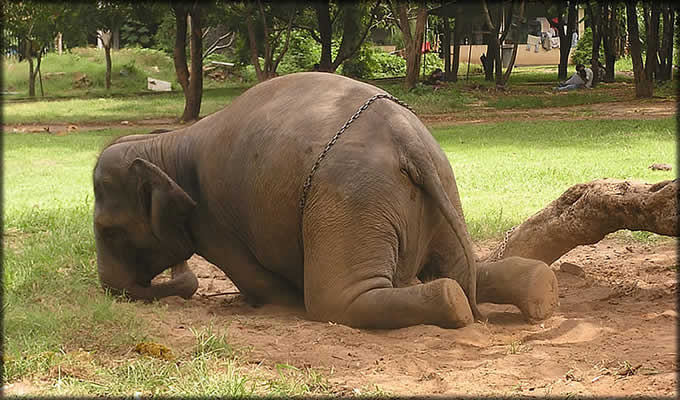 This is "Ganga", a juvenile Asian elephant living her life in solitary confinement at the Gangaramaya Temple in Colombo, Sri Lanka.
You can see more photos of "Ganga" if you click on one of the photos on this page - all visible and embedded photos will then
be shown as a slideshow assuming that you click on the slideshow play button appearing in the upper right corner.