A single or series of very soft, short (generally 1-2 seconds), tonal rumbles, characterized by an ‘rrrrmmmm’ sound of descending pitch, made by an infant or calf as it begs for food or, more typically, access to the breast. An infant or calf typically initiates such Begging by tagging persistently alongside its mother with its trunk raised in a Periscope-Trunk posture and rumbling. Upon hearing her calf vocalizing in this manner, a mother typically stops with her foreleg on the calf's side forward - allowing her calf access to her breast. This behavior and associated calling is frequently observed in an elephant family with infants and calves. We refer to it as a Begging-Rumble.

Among free-ranging elephants the vast majority of this type of rumbling is heard when calves are Begging for access to the breast, although calves who are soliciting a share of a food item (e.g. heart of palm, Acacia branch), including from another's mouth, may also use a Begging-Rumble. In captivity, we have recorded these calls from orphaned elephants at the David Sheldrick Wildlife Trust at feeding time, whether food is a bottle of milk or coconut cakes. If a calf's demands are not met by its mother or care-giver it may escalate to a variety of Grumble-Rumbles, Cry-Rumbles, Roars or Roar-Rumbles.

Selengei's 6 year old male calf walks along side her in a begging posture Soliciting-Suckling and gives a barely audible Begging-Rumble, which is damaged by a clunking sound. She stops immediately and he suckles. But not for long she wants to catch up with the rest of the group. As she walks on he Ear-Brushes against her. (Maasai Mara, Kenya)

A female calf in Big Mama's family has been separated from her mother. She is comforted by a couple of allomothers and as this clip begins goes to the second adolescent female and Comfort-Suckles. The young females likely give Coo-Rumbles but we cannot hear them due to the wind. The calf's mother is the female in the left foreground eating a branch. The calf leaves the adolescent female and walks toward her mother and reaches a trunk to her mouth apparently begging. She gives a slightly Grumbly kind of Begging-Rumble, as if recalling her recent predicament. (Maasai Mara, Kenya)

Walli is still offering her breast to her 5 year old male, while her infant female is hungry. He is Soliciting-Suckling and uses his trunk to warn his younger sibling away. She stops and puts her leg forward, he gives a little Begging-Rumble and suckles briefly. The infant hears him Suckling and gives a little Husky-Cry and then comes to car. (Maasai Mara, Kenya)

Walli is still offering her breast to her 5 year old male, while her infant female is hungry. The 5 year old male comes back to suckle again - he has been away since the last time. There is a plane overhead but we can hear him give a Begging-Rumble. (Maasai Mara, Kenya)

We can hear Maasai livestock in the background and she is eager to move on. She interrupts his Suckling and he gives a Grumble-Rumble in a more complaining tone. She continues to walk. In this series of calls we can hear the subtle shift from polite Begging-Rumble to more complaining Grumble-Rumble - it is not easy to draw a clear line between the two. (Maasai Mara, Kenya)

A 2-3 year old male calf is Suckling. He seems to be having some 'teething' problems because he keeps on stopping to Check-Tusk as if it is painful. We hear him make two very soft Begging-Rumbles. (Amboseli, Kenya)

A six month old male calf is trying to Suckle from his mother, Queiroz, There is an estrus female in the group with many large males and he keeps being interrupted when his mother moves out of the way. We hear two Begging-Rumbles (barely audible and circled), followed by a Cry-Rumble (circled) and then a Roar (circled). This is a typical escalation pattern by a hungry calf whose needs aren't being met due to a mother who is on the move or is trying to wean the calf. This session was much longer and we have shortened it. (Amboseli, Kenya) 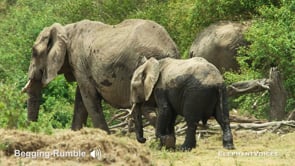 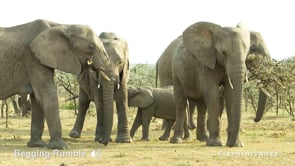 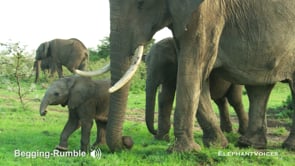 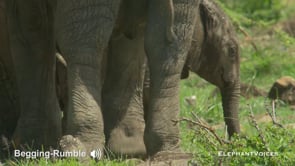 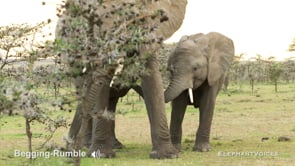 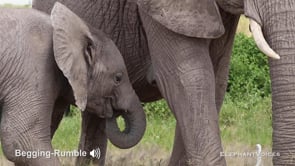 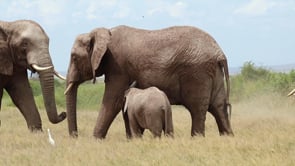 A Begging-Rumble by Elaine < 1 year old as she Solicits-Suckling. (Amboseli, Kenya) 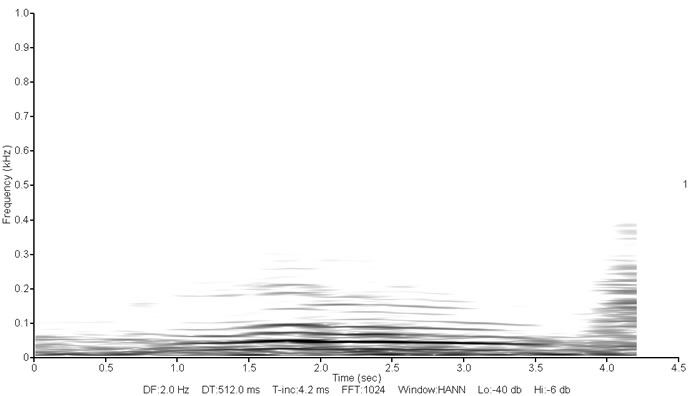 A Begging-Rumble with a slightly complaining tone by Europa, age 5 years, as she is pushed away from the breast by mother, Edwina. (Amboseli, Kenya) 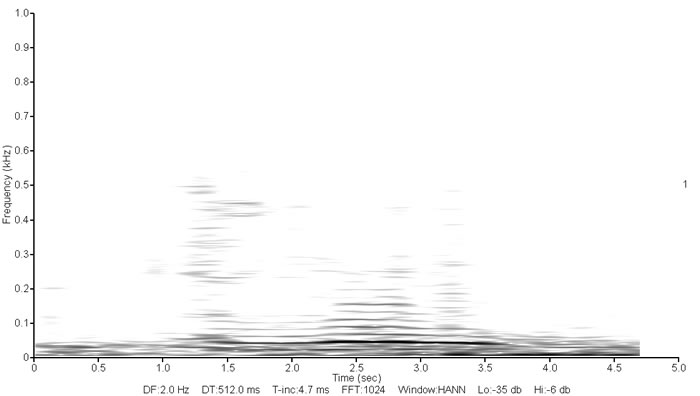 A Begging-Rumble by one year old Emmet as he Solicits-Suckling. (Amboseli, Kenya) 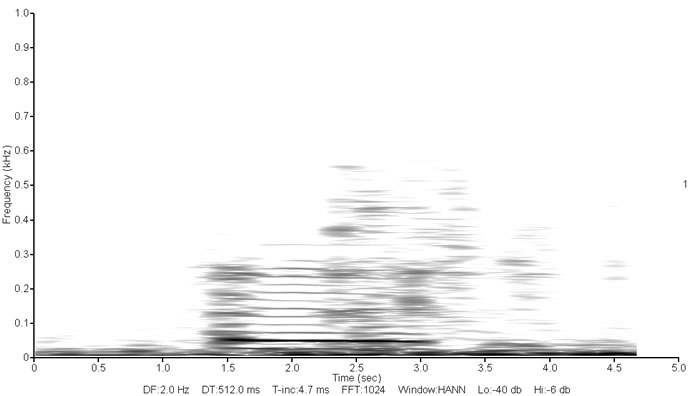 A Begging-Rumble by Ella's one year old calf as he Solicits-Suckling. (Amboseli, Kenya) 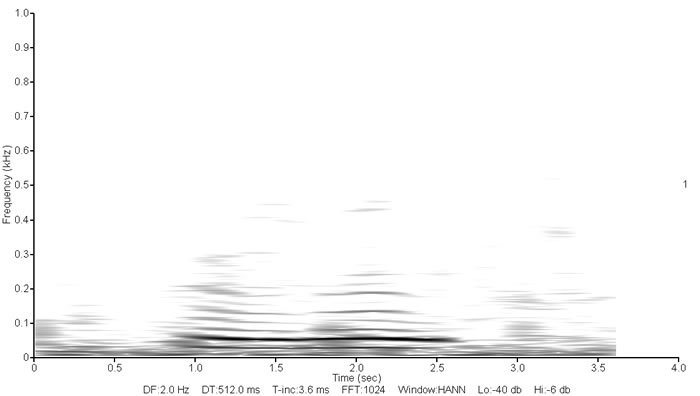