Strange, but missing GJFields library for /home/www/elephantvoices.org/plugins/content/autoreadmore/autoreadmore.php
The library should be installed together with the extension... Anyway, reinstall it: GJFields

Elephants killed for their ivory

Elephants are being slaughtered, ivory is on the move, and many elephant populations are in free-fall decline once more. In 2009 it was estimated that as many as 38,000 elephants were poached in 2006 alone (Scientific American, July 2009 (2.59 MB), a number representing approximately 8% of Africa' remaining elephants killed in one year. This figure far exeeds the elephants annual reproductive rate and even exceeds the poaching rate that existed in the late 1980s, before the 1989 ban took effect.

In August 2014 another key paper was published in Proceedings of the National Academy of Sciences, "Illegal killing for ivory drives global decline in African elephants". To a large extent it confirms the trend exposed in the paper from 2009. The headline in National Geographic Daily News covering it 18 August 2014 read "100,000 Elephants Killed by Poachers in just Three Years, Landmark Analysis Finds".

Since the Proboscidea originated 60 million years ago, the order has included some 10 families, 45 genera and 185 species and subspecies, in a spectacular diversity of forms. The African (Loxodonta africana and Loxodonta cyclotis) and Asian elephants (Elephas maximus) existing today are the sole remnants of that remarkable evolutionary radiation. Representing a tiny fraction of their former numbers, the living elephants survive in only small pockets of the land they once roamed. In many areas elephant populations have already gone extinct or are highly endangered. 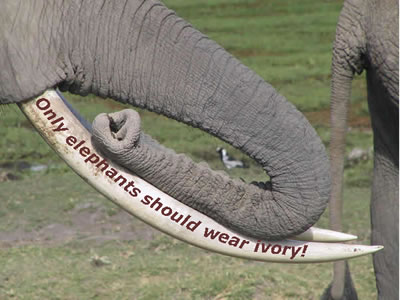 Over centuries legal and illegal hunting ("poaching") for the commercial ivory trade and, in Asia, the capture of elephants for human use, have been largely responsible for the elephant's demise. The number of wild Asian elephants now comprise less than a tenth of all remaining elephants, and continue to decline in shrinking habitat. In Africa, elephants once inhabited the entire continent, from the Mediterranean down to its southern tip, but the ivory trade coupled with human expansion caused a continental decline in their numbers. By circa 1600 North Africa was devoid of elephants. In modern Africa, poaching for ivory has been fuelled by poverty, political instability and civil unrest coupled with the easy availability of arms. In recent history, between 1979 and 1989, Africa's elephants underwent a dramatic and devastating decline, falling from approximately 1.3 million individuals to an estimated 609,000. Human greed and rising prices of ivory were responsible for the appalling slaughter.

The killing of elephants for their ivory is the cause of enormous losses in numbers as well as suffering to individuals. The deaths of individuals causes the fragmentation of families and destroys the very fabric of elephant society. Among Asian elephants where females are tuskless and only a small percentage of males have tusks, even subadult and juvenile tuskers are targeted, causing highly skewed sex ratios, as well as trauma and disruption to elephant families.

The tusks of male African elephants average seven times the weight of the tusks of females, and poaching is focused on males and old females. Large males are the primary breeders and the loss of older females impoverishes the social and

ecological knowledge of remaining family members, reducing individual survival. In populations with the heaviest levels of poaching, elephant groups may be composed of traumatized orphans bunched together in leaderless groups.

Some good sources of information, in addition to the two linked in the first paragraph of this page: An Opinion Piece in Science 12th March 2010; Elephants, Ivory, and Trade (

41.3 MB) published in 2013 and an Opinion Piece in National Geographic in October 2014: Irrelevant, Illogical, and Illegal–24 Experts Respond to Arguments Supporting Legalization of the Ivory Trade.

In late 2016 China pledged to shut down its ivory trade before the end of 2017, which, properly implemented and enforced, could be a gamechanger considering the disastrous poaching from 2007 and China's major role in it. It is in April 2017 too early to be sure about the actual impact on poaching figures of this important decision. What we do know is that prices on ivory has gone significantly down, according to a study published by Save the Elephants in late March 2017.

That the volume of human-elephant conflict is increasing is a sad fact - significant human population growth, lack of proper land use planning and bad governance in many elephant range states are among contributing factors. If the ivory trade and poaching gets under control more focus and resources can be directed toward finding constructive solutions for humans and elephants to co-exist.

ElephantVoices standpoint is that all elephants should be on Appendix I of CITES and that commercial trade in ivory should not be allowed.