Holding the trunk in a relaxed position (hanging down, resting on the ground or over a trunk), but with the tip of the trunk curled under and around such that the trunk fingers point in the direction of an object of interest (often behind or to its side). As the individual sniffs the fingers of the trunk can be seen to partially open and close. This behavior is a component of a number of Attentive, Vigilant behavioral constellations. J-Trunk is a subtle form of sniffing and appears to be used when the individual would not necessarily have reason to make others aware of his or her object of interest or plan.

For example, J-Trunk is typical of a young male around an estrus female, who may wish not to alert higher ranking males of his intentions. In contrast, Periscope-Trunk, Trunk-Sweep and Horizontal-Trunk are conspicuous movements and typically cause other elephants to take notice and adopt similar behavior and appear to be done to draw the attention of others.

J-Trunk occurs in all age/sex groups except young calves and infants.

Viajante acts as if he may be coming into musth. He walks away from Mud-Spashing while Trunk-Dragging. Then he appears to be sniffing as he adopts a J-Trunk posture several times and looks to be Tracking. He does a little Ear-Wave type movement. He Listens. He Rubs on a tree and while doing so he does several weird-looking Trunk-Bounces. (Gorongosa, Mozambique)

A young male appears to have detected a scent ahead of him and J-Sniffs as he walks. (Maasai Mara, Kenya)

An adolescent female appears to have detected a scent of interest ahead of her, and J-Sniffs as she walks. (Maasai Mara, Kenya)

A young male is walking toward a group of elephants resting under tree. He J-Sniffs as he approaches them. (Maasai Mara, Kenya)

gm0015 uses a J-Trunk sniff as he quietly contemplates us. (Gorongosa, Mozambique)

gf0070 starts to walk toward us but then sees us and stops and and begins Foot-Lifting. As this clip begins she stands vigilant, Listening and sniffing with a J-Trunk. After the end of the clip she decides to depart. All Bunch around her and they make Full-Retreat. (Gorongosa, Mozambique)

Aloisio, gm0040, stands contemplating us, vigilant. He is Listening and sniffing with a J-Trunk. (Gorongosa, Mozambique)

The Ear-Spreading and J-Sniffing by this young male indicates that he has detected us sitting on the ground outside the car to his right. (Maasai Mara, Kenya)

As the Mabenzi family walks past us they appear to get our scent. Notice the trunk-tips turned toward the camera - some adopting a Trunk-Toward, some a Periscope-Trunk and others, like Provocadora, the matriarch in the lead, adopting a J-Trunk. (Gorongosa, Mozambique)

The F family has heard our vehicle and are acting Apprehensive and Vigilant. gf0034 is seen with a J-Trunk, Listening, and Head-Swinging, her head raised and turning from side to side. (Gorongosa, Mozambique)

Provocadora, gf0012, stands Contemplating us with a J-Trunk. Her calf adopts a Periscope-Trunk as she tries to Solicit-Suckling, but Provocadora has other things on her mind and begins a Purposeful-Walk Advance-Toward us as she initiates a Group-Advance. She pauses and sniffs toward the others as if to see whether they are with her and she proceeds toward us with them backing her up; she adopts a J-Trunk several more times. (Gorongosa, Mozambique)

The I family responded to being caught out in the open by Bunching together and confronting us. First iJunia and Isabella and then Isabella and an adolescent tuskless female display J-Trunk. (Gorongosa, Mozambique)

Titus is in a group with an estrous female and Guarding musth male, who are out of view on the left. Notice how he uses a J-Trunk to monitor their position and activity - and his potential mating possibilities. This rather subtle form of sniffing is typical of males in the presence of an estrous female and guarding male. (Amboseli, Kenya)

This is adult male, Viajante. He is acting as if he is in musth. He has been mud-splashing and then pauses Listening and adopts a J-Trunk. He walks away from mud splashing Trunk-Dragging. Then he looks to be Tracking sniffing the ground and using a J-Trunk type sniff. Viajante does a little Ear-Wave type movement. He stops to Listen and adopts a J-Trunk again. He Rubs on a tree and, while doing so, he Trunk-Bounces. Prior to walking away we see him J-Trunk again. (Gorongosa, Mozambique)

Tee-Jay and Gordon, both in musth, have been engaged in an Escalated-Contest. But when Paolo, also in musth, appears they turn to look at him in anticipation. When Paolo is about 50 m away both males turn to face him, Waiting for him with some visible apprehension. Gordon is Foot-Lifting and holds his trunk under. Paolo walks toward them with Head-High, Chin-In in a very dominant posture while Tee-Jay's bravado has changed and he Waits for Paolo with Trunk-Toward and his chin further out than earlier. Paolo continues to Advance-Toward them and at about 3 m Tee-Jay Backs-Away. Both males Retreat-From Paolo. Paolo's arrival breaks up the fight, whether purposefully or not. (Amboseli, Kenya) 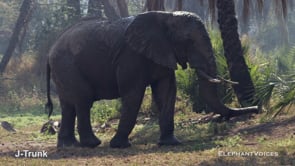 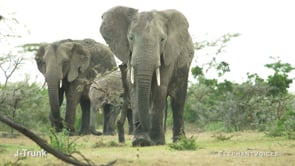 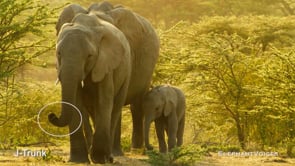 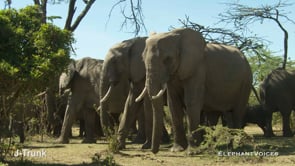 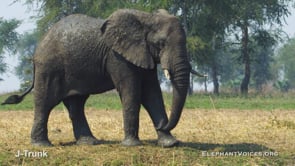 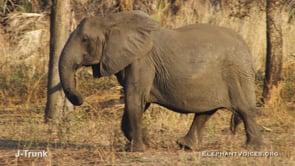 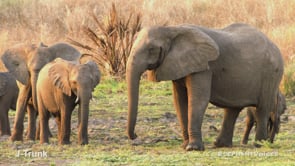 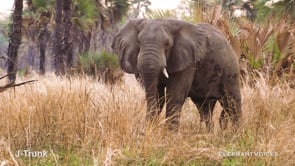 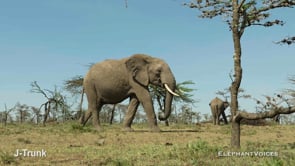 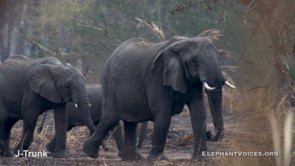 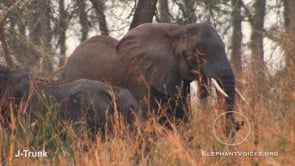 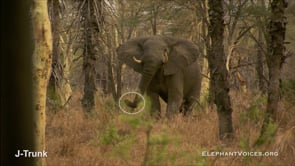 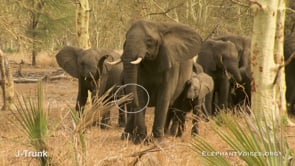 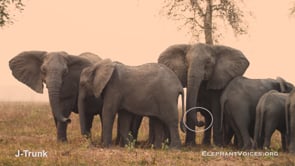 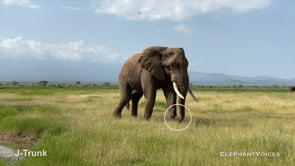 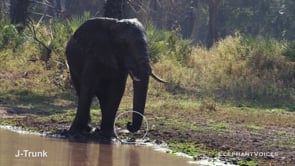 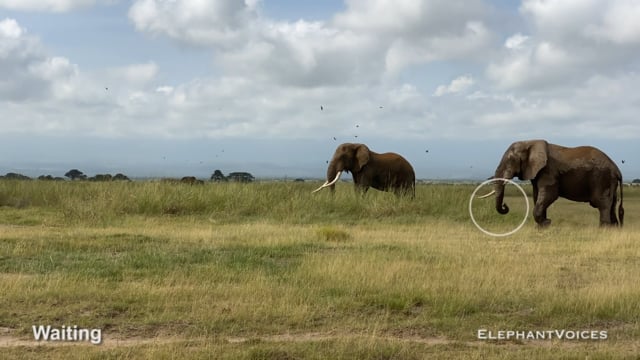