ElephantVoices is working on a major initiative to document the repertoire of African savannah elephant behavior (Loxodonta africana). The Elephant Ethogram represents a unique and comprehensive source of information about elephant behaviour and communication, based on ElephantVoices' decades of behavioural study, our multimedia photographic and acoustic collections, as well as footage collected during the filming of documentaries from the Maasai Mara, Kenya, and Gorongosa National Park, Mozambique. The Elephant Ethogram describes and preserves the gestural and acoustic "language" and behaviour of a species whose way of life, and very existence, is threatened by human greed and expansion. 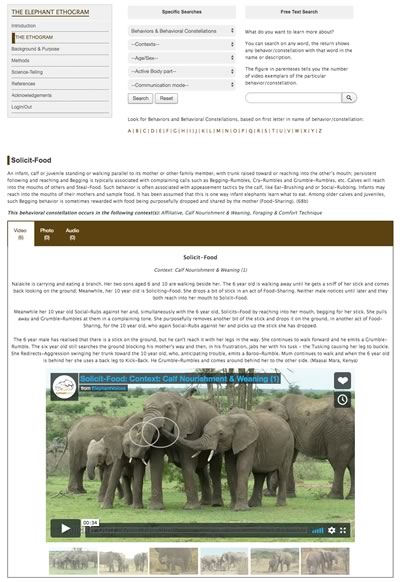 The first version of The Elephant Ethogram was made available on ElephantVoices.org in April 2021.

The Elephant Ethogram documents in a unique, user-friendly and fully searchable database, the complex and diverse communication and behavior of African elephants for scientists and others to study, compare and share. As a repository of exemplars of elephant behaviour, The Elephant Ethogram aims to:

The Elephant Ethogram represents a significant rebuild and expansion of ElephantVoices Elephant Gestures and Calls Databases. The original databases, developed in 2003 and revamped in 2011, are based on decades of study in Amboseli, Kenya. Unique in their detail, they constituted the only accessible online documentation of the repertoire of African elephant behavior.

Between 2011 and respectively 2016 and 2019 we ran elephant monitoring and conservation projects in Maasai Mara, Kenya and Gorongosa, Mozambique for which we now have additional images and video of elephant behavior. The expression of behaviors varies by population, often related to anthropogenic threats, and based on our work in Maasai Mara and Gorongosa we have documented behaviors not currently described or illustrated in our databases. From 2020 we were back collecting particular behavioral data in Amboseli National Park. The Elephant Ethogram combines the previous databases and new data collected, making a huge amount of information available with advanced search opportunities.

In a groundbreaking collaboration with copyright owners Off the Fence (The Netherlands), Gorongosa Media Project (US/Mozambique) and Bob Poole Films, hundreds of hours of raw footage of elephant behavior, originally shot for documentaries, were granted to us for use in science and education. In a time-consuming process we have extracted and described from this and our own footage over 2,400 examples of some 500 different elephant behaviors, which we have edited as short educational clips. These media put us in a unique position to improve our repositories to both deepen understanding of the behavioral diversity of elephants as well as how it is affected by human interference.

The Elephant Ethogram: A Library of African Elephant Behavior is made possible by generous support from the Crystal Springs Foundation, WildiZe Foundation, The Elephant Sanctuary in Tennessee, the Marshall Frankel Foundation, the Gorongosa Project, the Oakland Zoo, National Geographic, Spur - The Perenchio Family Fund and individual donors.

Behavior video example from The Elephant Ethogram, with caption: "G7 joins the Mabenzi family. As he arrives he sees Gogogo in musth and he stops and Looks-At him. As Gogogo Advances-Toward G7 Backs-Away." (Footage from Gorongosa National Park, Mozambique.)