Forcing the lower half of ear under and back so that a prominent horizontal ridge or fold appears across the ear. In an Aggressive or Attacking context it may be used by male and female adults, adolescents, juveniles and calves in combination with a variety of other threats such as Head-High, Look-At, Advance-Toward, Charge, etc. to emphasize that an elephant “means business.”

Ear-Folding can be either a short or a persistent display, the later indicating a "foul mood" or "testiness". Ear-Folding that is used in association with Head-Raising, Ear-Lifting or Rapid-Ear-Flapping is part of an Affiliative or Coalition Building display exhibited by adult, adolescent and juvenile females.

A male walks by the vehicle in full musth. He adopts a Musth-Walk and gives an Ear-Flap-Slide simultaneously with an Ear-Fold. (Maasai Mara, Kenya)

Rui is in musth and is Mud-Splashing. He pauses in his splashing to Listen - Freezing and Ears-Stiff and with his trunk held in a J-Trunk position. After the second bout of Listening he Ear-Folds and gives a quiet Musth-Rumble. He turns and gives a little Musth-Rumble again. As he leaves the mud-wallow he pauses to Listen with Ears-Stiff. This behavior - mud-splashing, Ear-Folding, Musth-Rumbling and Listening is typical musth male behavior. (Gorongosa, Mozambique)

Two groups that have been in the vicinity of one another come together. Note that in the clips before you can see Matriarch gf0070 move toward them and adopt a Waiting posture. In this clip she stands Waiting, her Chin-Out expectant and you can hear me explaining what I think will happen. As they come close she moves towards them and they Greet. We can see Rapid-Ear-Flapping, Ear-Folding, Trunk-Twining, Trunk-to-Mouth. This is a Greeting-Ceremony. There were two cameras and the second part of the clip is a close-up of the behaviors without audio. (Gorongosa, Mozambique)

Two groups that have been in the vicinity of one another come together and we see a close-up of a Greeting-Ceremony. There were two cameras and this is a section of a close-up of the behaviors without audio. (Gorongosa, Mozambique)

This is a short section of a long interaction between a large adult female, gf0061, and a young male which culminates in Sparring. The entire sequence can be seen under Sparring. As this clip begins the two are facing one another. The young male Ear-Folds and flaps his ears. He puts his trunk above her and rests it on her head. She does the same to him. She has her tusks over his head - his are under her jaw. They stand Open-Mouth-to-Open-Mouth with heads raised high. He Ear-Folds slightly. They step back from each other and then into one another again. They gently push back and forth on each other and then he puts his tusks on her head. More slight Ear-Folding. Meanwhile a young male (her son?) comes in and reaches Trunk-to-Mouth to the young male. He pushes her a bit, but they continue and she places her trunk on his head and he on hers - she is in the higher position. They draw back and stand face to face. They stand for a bit then he initiates and pushes her a bit more. She turns and walks away while scratching her ear with her trunk. The young male follows her and Touch-Self - putting his trunk in his mouth and then raises head in alarm as a bigger male approaches. They all walk away. (Gorongosa, Mozambique)

The young male has just tested (Trunk-to-Genitals) a female. Then he turns and threaten another female and Supplants her at a tree she was feeding on. He (right) starts his threat with slight Ear-Flap-Slide, Advancing-Toward her Ear-Folding at her while he Reaches-High and touches her tusk. The female (left), likewise Advances-Toward him with Head-High and Ears-Folded. She Forward-Trunk-Swings at him. (Maasai Mara, Kenya)

A young male (center right) is minding his own business at a water-hole. An adult female approaches and stands next to him (center left); he Orients-Away slightly. As this clip starts she stands near to him Waiting, and exhibiting Foot-Lifting. As he Orients-Toward her a little she turns on him, ramming into him and Tusking him with an audible sound and then reaches her trunk out at him as he Retreats-From and Look-Back. She Ear-Folds and Ear-Slaps loudly - dust flying and departs. (Maasai Mara, Kenya)

A juvenile male (left) and an adolescent male (right) stand facing one another. The juvenile male is interested in what the older male is doing and extends his Trunk-Toward him. It looks as if he may be Soliciting-Food. The older male threatens him first Ear-Folding and then stepping forward and with a Forward-Trunk-Swing, Slapping him hard with his trunk. The younger male Retreat-From-Back a little. But then he approaches again and extends his Trunk-Toward the older male who Forward-Trunk-Swing at him again. The younger male departs. (Maasai Mara, Kenya)

An adolescent male threatens a young female (Mama Little E) with an infant (Little E) by Advancing-Toward her while Ear-Folding. She Retreat-From. (Maasai Mara, Kenya)

A young male Ear-Spreading approaches Mama Little E. She Ear-Folds at the young male as she Backs-Away and uses her trunk to Shepherd Little E drawing him away from the male. (Maasai Mara, Kenya)

It is hard to see what happens, but we hear a young male Roar and then we see Valente, of the Mabenzi family, Advancing-Toward him while Ear-Folding; he Runs-Away. After seeing off the young male the family all turn from the male and begin a Group-Advance on us in an act of Redirected-Aggression. (Gorongosa, Mozambique)

A young male moves through a group Ear-Folding at others. Notice how is Ear-Flapping approaches Ear-Slaps. (Gorongosa, Mozambique)

Five medium and small adult males are following an estrous female. A larger male arrives and the oldest of the initial group of males Orients-Toward and Advances-Toward him with Periscope-Trunk. The newcomer also Advances-Toward and Ear-Folds. After assessing the situation the smaller male Orients-Away and Retreats-From. The new male continues to Ear-Fold and then reaches Trunk-to-Genitals to the male he has been threatening. He continues past him and tests the estrous female with another Trunk-to-Genitals. (Amboseli, Kenya)

This is a short section of a close to three hour Escalated-Contest in which an older male intervenes at least 5 times to help the male with the broken tusks. In this last incidence of this behavior the older male enters from the right and immediately the broken tusked male Advances-Toward the longer-tusked male with a very aggressive posture - Open-Mouth, Trunk-Curled-Under as if to bounce or drag, Ears-Folded - he moves rapidly toward the longer-tusked male who Backs-Away 35 paces. The broken-tusked male continues to Ear-Fold the entire way. The older male follows them in a lazy sort of way. The broken tusked male is really pushing for a fight and they make contact briefly. But the older male comes up close to them; it is hard to tell but it looks as if he gives the aggressor a slight threat and he appears to Retreat-From. (Amboseli, Kenya)

There are two estrous females and a musth male in this large aggregation. Several families are meeting and there is a high arousal level. A large adult female Ear-Folds and Ear-Slaps at females from another family. (Amboseli, Kenya)

The female on the left is in estrus and Guarded by Emo in musth. Other males are present. Another female, with asymmetrical tusks, who is just coming into estrus comes into view from the right and threatens the estrus female first Ear-Folding and then with a Bow-Neck-Advance-Toward which includes a vigorous Head-Dip and audible Ear-Slapping against the side of the body. The first estrous female Retreats-From and Emo tests the second estrous female Trunk-to-Genitals. She stands for him to test, but then give the first female a Bow-Neck-Charge with Ears-Folded and another vigorous Head-Dip and Ear Slapping against the body. The first female Runs-Away with her calf. A male comes to test the second female and then he goes off after the first female. The second female Rumbles. (Amboseli, Kenya) 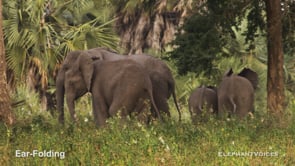 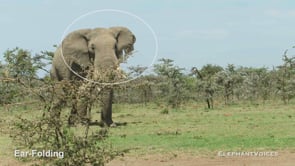 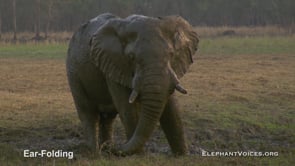 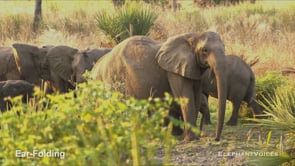 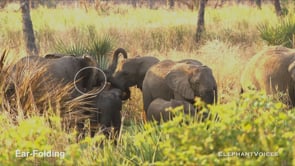 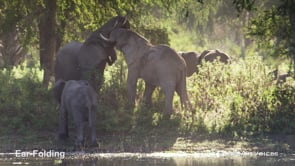 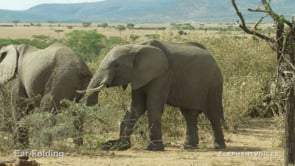 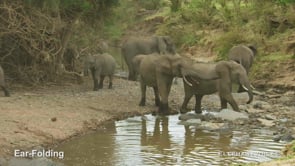 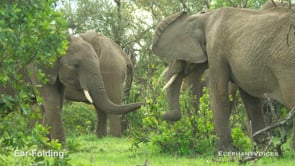 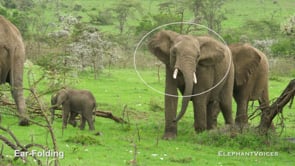 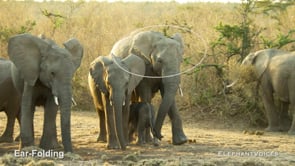 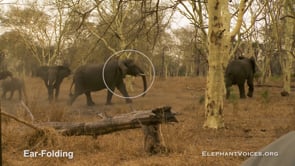 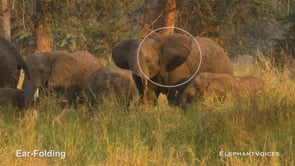 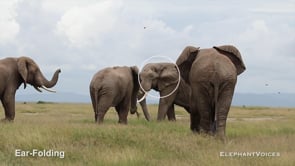 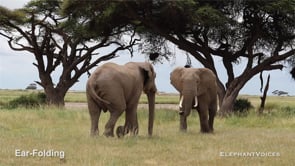 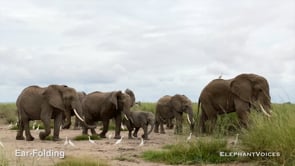 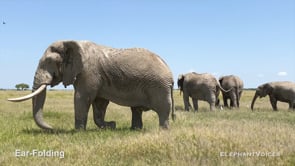 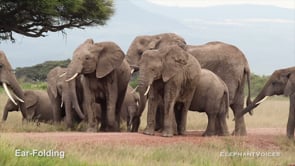 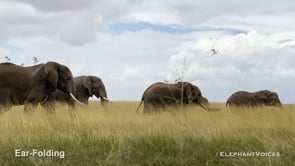