A single slight dipping and raising movement of the head with Ears-Spread, typically combined with reaching to Touch-Ground with the trunk. This display is observed in all age/sex groups is typically seen when an elephant is confronting a threat or during social play. In a more pronounced version that Douglas-Hamilton 1972 called a Head-Jerk or Head-Toss the head is first lowered and then pulled up sharply so that the tusks describe a wide arc and the elephant Stands-Tall. This display is often observed as elephants crash through bushes to make a dramatic display to an adversary or predator. It is observed in all age/sex groups and often seen during play when Bush-Bashing.

Big Mama's family is standing resting next to the film car. Merilyn (f0313) is standing facing the car relaxed. Then it seems as if someone may have made a sound or a movement in the vehicle that concerned her. We see her raise her head slightly and spread her ears (Ear-Spreading) and dip her head (Head-Dip) as she takes a step backward. (Maasai Mara, Kenya)

Juvenile male pretending to be tough - playfully - Foot-Scuffing, Ear-Spreading, Bush-Bashing and Pirouetting all to the car. He does a Head-Dip as he Pirouettes. (Maasai Mara, Kenya)

During a long bout of social play involving two young male calves, they begin a round of Bush-Bashing - crashing into, through and out of the bushes, occasionally pausing to peer out while Standing-Tall. During one of these pauses one of the youngsters exhibits a Head-Dip. (Maasai Mara, Kenya)

Two little males have been playing. One pauses to bite off a morsel of food, when the other comes over and and playfully sniffs his bum. He whirls around, spreads his ears (Ear-Spreading) and dips his head down and up. You can hear a faint complaining sound as the other disturbs him. (Maasai Mara, Kenya)

Six males are standing around estrous female, Nastya. The youngest male has Backed-Toward a larger male in a cozy fashion as if he is confident that he won't be Pushed or Tusked - as if they know one another, perhaps related. A new male arrives in the group and the young male puts his Chin-out in anticipation. He gives a couple of Head-Dips and reaches Trunk-Toward to touch the other male, again with Chin-Out. He stands with Chin-Out and Foot-Forward. Then he Backs-Toward the older male again. (Amboseli, Kenya) 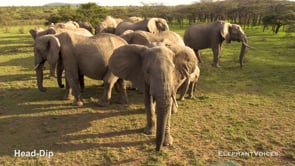 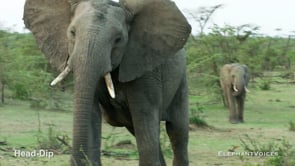 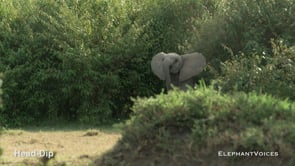 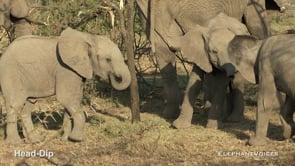 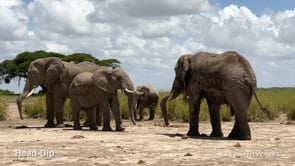 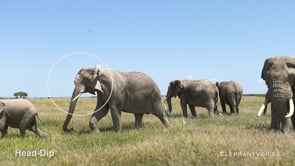