Bending or kneeling down and tusking the ground and, often, uplifting clods of soil and vegetation. When elephants engage in Mud-Wallowing they often Tusk-Ground. This is particularly true of Mud-Wallowing musth males who will engage in an exaggerated form of Tusk-Ground along with other components of a musth male display. In an Aggressive context Tusk-Ground is seen in the manoeuvring between two males during an Escalated-Contest, apparently as a demonstration of ‘look what I will do with you’.

In an Attacking & Mobbing context an elephant may Kneel-Down and Tusk a person or other animal into the ground to kill or maim it. During Social Play elephants engage in a gentle form of both Kneel-Down and Tusk-Ground, behaviors that encourage other elephants to Climb-Upon.

Pascal is in full musth. He is standing in a water hole Listening. He begins to move toward the edge and we hear a Musth-Rumble and he begins to Ear-Wave. A plane is still passing overhead. He stops at the edge of the water hole to Tusk-Ground. There is another musth male in the vicinity but they have not yet met. (Amboseli, Kenya)

Icarus is in full musth and is Mud-Wallowing. He digs his long tusk into the ground and rests in that position. He trows more mud on himself and then rubs his face and you can clearly see the Musth-Trunk-Wrinkle. (Amboseli, Kenya)

A male in musth Ear-Folds, Ear-Waves and Musth-Rumbles and then plunges his tusks into the ground in Tusk-Ground. Footage courtesy of Linda Porter. (Maasai Mara, Kenya)

In the rain a musth male Tusks-Ground sometimes raising a hind foot off the ground. He stands up with clods of dirt on his tusks and, raising his head he drags his trunk over his head and temporal glands in a typical musth male Elephant Aware. (Maasai Mara, Kenya)

At a small mud wallow X004 in musth spends over 9 minutes in Tusk-Ground as a loud plane passes overhead and several cars drive by. He Musth-Rumbles several times and engages in Exaggerated-Foot-Splashing all the while digging his long tusks in the ground. In between these bouts of energy he appears Contemplative, occasionally Listening. Finally he hauls himself up and walks off. We have selected a little bit of this behavior. (Amboseli, Kenya)

A 6 year old female from Selengei's family is down on her knees engaged in Tusk-Ground. A one year old calf is behind her while the rest of the family is moving about around her while foraging. Selengei stops next to her as if Waiting and the 1 year old calf comes to stand next to her, as if about to engage in play with her. But the female gets to her feet and Head-Shakes. (Maasai Mara, Kenya)

Elephants begin to depart from a deep pool where they have been playing and Bathing. An adult female begins to Splash-with-Trunk, Kick-Back and Tusk-Ground with exuberance, before lying down in the water. (Amboseli, Kenya)

A medium sized adult male is in a mud-wallow depression. His tusks are covered in mud as he has been engaging in Tusk-Ground. After a while he plunges his tusks into the ground again. A larger male arrives and displaces him. (Amboseli, Kenya)

A medium sized adult male enters a mud-wallow depression and engages in Tusk-Ground. He Tusks-ground for more than 2 minutes. He comes out and gives a Head-Toss. (Amboseli, Kenya) 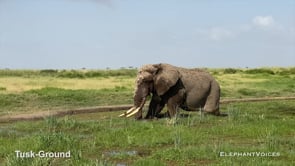 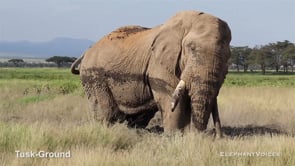 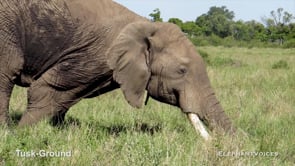 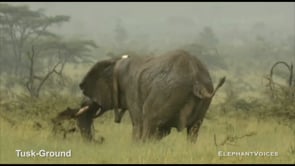 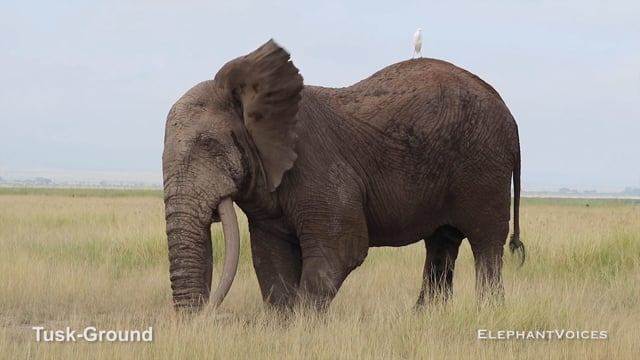 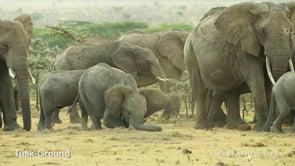 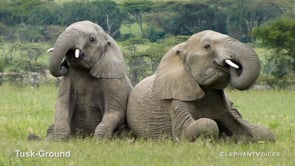 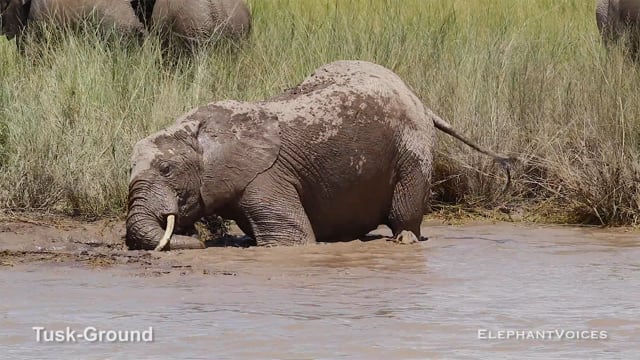 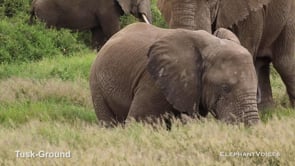 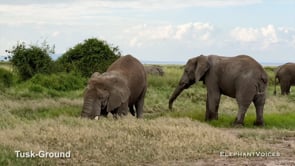 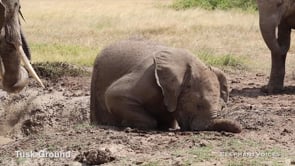