ElephantVoices uses knowledge acquired over decades to act as a voice for elephants. In the wild, ivory poaching, destruction of habitat, competition with people for diminishing resources, sport hunting, culling and capture, all threaten the freedom and survival of elephants. In captivity, their well-being is affected by abusive practices and exploitation for commercial gain.

Through Conservation, Advocacy, Research and Education, CARE, we promote the protection and kinder treatment of elephants wherever they may be. As acknowledged experts on the natural behavior of elephants we offer insight to protect them and the authority to speak on their behalf.

ElephantVoices' standpoint is that elephants need protection as a species and as individuals. After more than 40 years of study we know that among elephants, just as among people, wisdom comes with age. An elephant's proverbial memory and life experience means that older matriarchs are more discriminating than younger matriarchs; the loss of a matriarch can affect the future of an entire family; the death of a mother means the death of her young calves and the lowered survival of older offspring; the lack of role models or exposure to severe trauma when young can result in abnormal behavior in adulthood; the deaths of older females or large males with big tusks to a poacher's or hunter's bullet impacts the fabric of a society and the survival of a population. 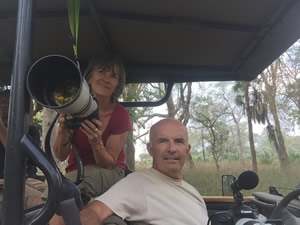 Safeguarding elephants means understanding the dynamics of a society, the incorporation of this foundation of knowledge into conservation practices and the raising of the public consciousness. ElephantVoices makes the sharing of this information a priority.

In early 2011, ElephantVoices launched a citizen science elephant conservation project based in the Maasai Mara ecosystem, Kenya. Our goal was to develop a working model for citizens to monitor and protect elephants, partly by providing the authorities with information related to the movements of the Mara elephants. Read more about this initiative here - and the main report from the project published in April 2016 here.

Between 2011 and 2019, ElephantVoices ran an elephant monitoring, conservation and research project, in Gorongosa National Park, Mozambique. Some of our work in Gorongosa was presented in the six-part documentary series Gorongosa Park: Rebirth of Paradise (in episode 2 and 5) aired on PBS and National Geographic. 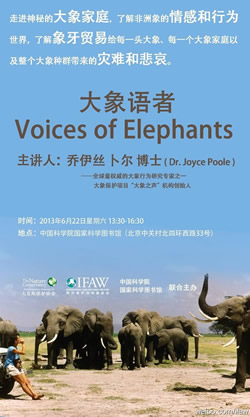 For thousands of years elephants have experienced one of the more exploitative relationships with humankind of any wild species. In recent decades, detailed study has taught us that elephants are socially complex, self-aware individuals, who possess distinct histories, personalities and interests, and are capable of suffering.

One of our goals is to use our knowledge to be a voice for elephants. We educate via scientific and popular articles, lectures, TV documentaries, radio broadcasts as well as via our website and social media. We speak out on behalf of elephants through publications, interviews, expert statements and testimony, or in court, where necessary.

We are co-founders and partners of Global Sanctury for Elephants, and Santuário de Elefantes Brasil, a groundbreaking initiative and project to offer sanctuary for suffering elephants in South-America. You can read more about the basis for this initiative here.

Our overall priority, expressed in our Advocacy Policy, is to take initiatives where we have expertise and on issues where we can have the broadest influence on the protection of elephants.

Listening to the voices of elephants over decades has taught us that communication is the glue that binds the social network of an intelligent species, and its study offers a window into the hearts and minds of elephants. Our collection of observations, audio and video recordings, and images form the basis of extensive databases, that are visited and used by a world-wide audience.

A decades-long study of elephant social behaviour, communication and cognition in Amboseli, Kenya, forms the core of our long-term research of these remarkable animals. Our work in the Maasai Mara, Kenya, and Gorongosa National Park, Mozambique, has added to this body of knowledge. From 2020 we are back working in Amboseli.

By studying what elephants are capable of understanding and what they communicate to one another, we have a better chance of finding solutions to the many challanges they face. We collaborate with elephant biologists all over the world and our online collections form a unique resource for other scientists and the public.

Our endeavor to protect elephants is inspired by love and deep respect for them as a species and as individuals, which, in turn, is based on our understanding of them gained through long-term study. To protect the lives of elephants and to sustain the beauty of the places they live, we must inspire others to feel likewise. Therefore, education, the sharing of knowledge, underpins all that we do. 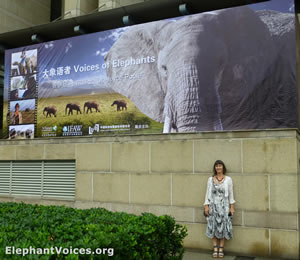 We give lectures, speak to school kids, exchange emails with students, disseminate information through our website, social media, databases and via documentaries and publications, and by being available to the media.

Our documentation and collections of elephant behaviors form resources of value to all those studying and interested in elephants. The Elephant Ethogram: An Library of African Elephant Behavior was launched in April 2021 - presenting unique material, including close to 3,000 video clips, sounds and images in a fully searchable database available for all.

The short film below is an example of a collaboration between ElephantVoices and Howard Hughes Medical Institute, in which Joyce talks about tusklessness among elephants in general and some of our related findings in Gorongosa National Park, Mozambique. The film is part of HHMI's Elephant Portal - and ElephantVoices efforts within educational outreach.

Joyce and Petter frequently visited and had lectures at Koiyaki Guiding School in Maasai Mara, Kenya, during their citizen science conservation initiative there from 2011 to 2016.

In this short HHMI production Joyce talks about tusklessness among elephants in general and some of our related findings in Gorongosa National Park, Mozambique.