Many leading authorities on elephants, including scientists, conservationists, welfare experts and veterinarians, agree that elephants have no place in entertainment. Elephants are socially complex, keenly intelligent and vigorous animals who, by their very size and nature, are ill-suited to life in captivity. In the wild, they are on the move for 20 hours a day, exploring their environment, foraging, socializing, caring for their young, and searching for mates and distant friends and relations. Elephants live in an extensive social network that radiates out from the mother-offspring bond to include family, extended family, bond groups, clans, the entire population, including adult males, and even beyond to strangers. At the core of this network is the family in which females remain for life.

No room for error in the performance industry 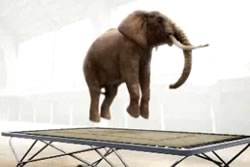 The conditions forced upon elephants used in entertainment are inherently detrimental to individual welfare, since physical and social needs are always secondary to performance. Calves are torn from their mothers to be broken and intensively trained. By long tradition and often by necessity elephants are held in small pens or on chains and transported around in semi-trucks. On location they are often even further restricted. These conditions bear no semblance to an elephant’s natural lifestyle. Lack of space and companions, and physical and mental inactivity all have enormous consequences for the individual’s health and well-being over the course of a lifetime.

Training is a violent affair that begins when elephants are still babies; it is life-long and unrelenting, meant to break them and force them to be compliant and obedient. In the performance industry there can be no room for error with an animal as powerful and as intelligent as an elephant. To ensure that elephants perform consistently they are kept under the constant control of a handler. At the core of this control is the bullhook, a steel-tipped device similar to a fireplace poker that is used to prod, hook, jab (so-called “guiding”) and strike elephants. Even when not in use, the bullhook is a constant reminder of the pain and punishment that can be meted out at any time, for any reason. So powerful is the negative association with the bullhook that an elephant who has not even seen the device in years will respond immediately to its mere presence. 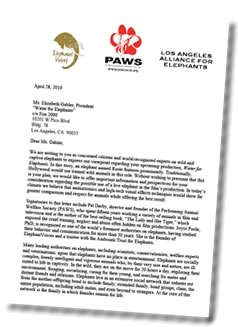 Films must be made without cruelty and harm

Training of elephants for the film industry is always secretive, performed at animal training compounds away from the main production to assure the total control and consistent performance that the handler needs once on the set. This also circumvents on-set monitoring by humane inspectors and scrutiny by actors and crew who might object to training practices.

The depth of knowledge we have as a society about elephants and their natural lives and needs, in concert with what we know about their suffering in captivity, should compel anyone in the film industry to use alternatives to live animals on the set. Surely, in this time of advanced film and computer-based technologies, including computer-generated imagery (CGI), VFX and animatronics, there is no reason to do otherwise. The amazing strides made in this area allow films to be realized without the cruelty or harm that exists, though it may not be seen on the set. In late March 2014 the film "Noah" premiered, where visionary filmmaker Darren Aronofsky shows what possible through the use of CGI. "It wouldn't make sense to make a film about saving animals while putting real animals in harm’s way on a film set, especially when cruelty-free technology is faster and easier and saves money", Aronofsky said in this exclusive interview. We obviously couldn't agree more.

In May 2010, ElephantVoices, PAWS and Los Angeles Alliance for Elephants wrote a joint letter (439.96 kB) to President Elisabeth Gabler and two others responsible for the film, "Water for Elephants," explaining why they should not use live elephants in the production. The book Water for Elephants by Sara Gruen exposes the abuse of people and animals by the circus, yet by using live animals in the production, the film condones such ill treatment. Perhaps we wrote too late for them to change their plans, or perhaps they don't care or disagree - we did not receive an answer and shooting started a couple of weeks afterwards with live animals.


Patty Shenker produced this excellent piece with late Pat Derby at PAWS, giving the main reasons why animals
should not perform in films. Both lions and elephants are mentioned - the facts and arguments are the same.

Any use of elephants in marketing is disgraceful

Elephants and other animals have long been used in entertainment with the travelling circus being the primary focus of such exploitation. Yet, elephants are also commercially exploited in Las Vegas shows, in road-side shows, in silly publicity gimmicks and by companies marketing their merchandise. Frivolous stunts have included covering an elephant in paint, putting an elephant inside the world's largest bubble and making an elephant wave goodbye.

To perform in this manner elephants are trained and transported around in the same manner as for the circus - in fact these elephants usually have performed in the circus. The bad examples are numerous - thousands of elephants and other animals suffer each year to entertain and market activities and products aimed at you. This is not only about more or less scrupolous owners, but about the consequences of using elephants in activities where strong discipline and brutality is the only way to keep control.

Forcing elephants to act in unnatural ways for commercial gain is abusive, backward and in bad taste - especially when there are good alternatives. The animations embedded and linked below show a couple of fun examples of what's possible with computer and software technology, and these were made quite a few years ago. There is no reason for abusing elephants, or other animals for that matter.

Courtesy of Nicolas Deveaux, cube.
You can find another excellent and entertaining marketing piece made by Nicolas here.