An elephant persistently following the scent of another, by actively scenting with his trunk, sweeping the ground back and forth and sometimes scanning the air. This behavior is often observed among musth males who may adopt a more directed stride. It may also be observed when an elephant is lost and searching for its family or when an attacking elephant Tracks a person on foot, or a vehicle. Elephants have been known to Track over many kilometres and may leave sweeping snake-like marks upon the ground.

A young male has walked past a line of dung Head-Low and begins Tracking a scent on the ground. He backs-up to sniff something that he wants to investigate further. Then he continues on his way, his trunk gently touching the ground here and there. He is alert Eye-Blinking, he pauses with a J-Trunk, Monitoring. He walks on and then again pauses and backs-up to inspect something more carefully. (Maasai Mara, Kenya)

A young male is Tracking - appears to be following a trail of someone and gives several Trunk-Flick-Downs. (Maasai Mara, Kenya)

A young male is walking across an open plain on the scent of something, Tracking. We can see the tip of his trunk carefully selecting where to sniff. (Maasai Mara, Kenya)

A young male walks along, his trunk hoovering back and forth Tracking a scent on the ground. Early on he Rumbles and Ear-Flaps and immediately gets fresh Temporin. He engages in a long bout of Flehmen and many Trunk-Flick-Downs. (Maasai Mara, Kenya)

gm0008 Rui in musth and is Tracking. He adopts a Purposeful-Walk as he snakes his trunk back and forth as he Sniffs-Ground following a scent trail. He does a couple of Trunk-Bounce-Drags and displays Periscope-Trunk. Rui appears to catch a scent and stops dead in his tracks, Foot-Swings and then abruptly changes course and continues Tracking. (Gorongosa, Mozambique)

We meet Viajante in musth Tracking - on the trail of another elephant. We watched as he walked down the road toward us snaking his trunk back and forth following a scent. Later we met the Gorongosa vet on the road with a vehicle full of rangers. They had been following the footprints of an elephant who for the last 3 kilometers had also left drag marks from his trunk along the road and were concerned that there was something wrong with him. We were able to tell them that it was Viajente in normal musth male behavior. (Gorongosa, Mozambique)

Paolo is in musth and is heading toward Longinye Swamp along a trail. He is Tracking. Notice how he moves his trunk back and forth sniffing where other elephants have walked, urinated and defecated. (Amboseli, Kenya)

Pascal is in musth and can be seen Urine-Dribbling. He is Tracking as he follows behind a family group. His trunk''hoovers'' along the path that they have taken. He pauses to Listen, his trunk in a J-Trunk position. He continues Tracking and then pauses again sniffing the ground and Listening with a J-Trunk. He continues Tracking and then he makes a little kick movement and steps back to sniff something. He Flehmens and continues to Track. (Amboseli, Kenya)

X004 is in musth and has been engaged on various musth displays and Listening and searching for receptive females. In this clip he is Tracking - snaking his trunk back and forth just above the ground either searching for or following a scent. (Amboseli, Kenya)

Nine year old Nastya is in Estrus and has been separated from the rest of her family for over an hour. As she arrives at the KH4 waterhole we thought that she would Drink, but instead she was totally absorbed in Tracking - sniffing and following tracks on the ground.

We mention that perhaps she is following Pascal, but soon after she gives a Contact-Rumble. Soon after she begins to walk away with all the males following her. In the next couple of clips after this one she finds her family, so we think it is likely that she was sniffing her family's footprints. (Amboseli, Kenya)

This is the Mabenzi family. They have just Charged a vehicle and engaged in a celebratory End-Zone-Dance. Then matriarch, Valente, again Initiates-Movement, this time a Group-Advance following the vehicle down the track. They snake their trunks along the ground as they Track the vehicle. Eventually they abandon their advance and go back to the forest. (Gorongosa, Mozambique) 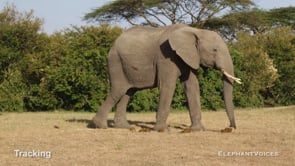 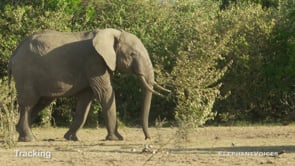 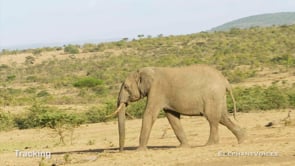 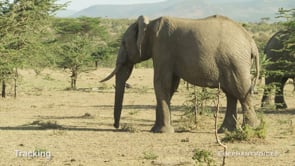 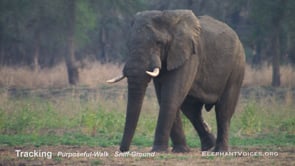 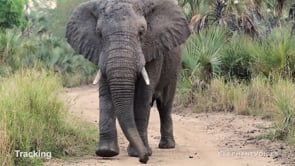 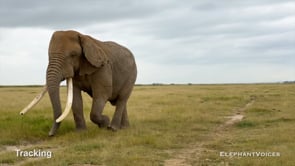 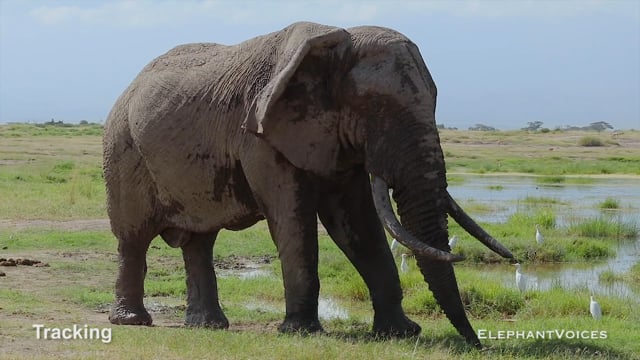 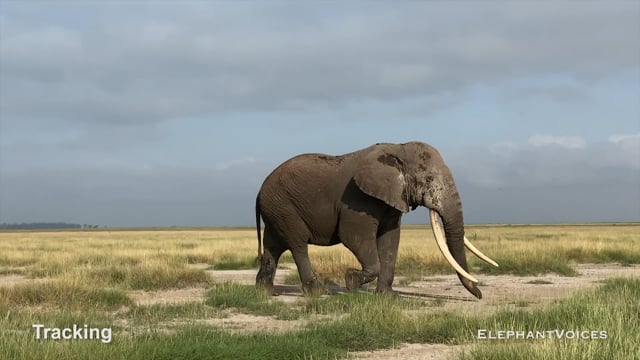 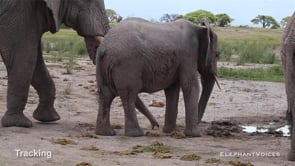 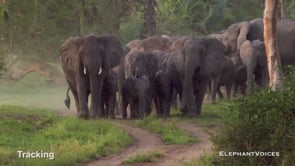