An elephant getting down on its knees is an invitation to play. Typically an older female juvenile or calf will lie or kneel down, encouraging younger individuals to climb on top of her. A larger male will lower himself down on his knees to encourage a smaller male who has shown reluctance to Spar. Kneel-Down can refer to either or both fore- and hind legs.

This behavior occurs in the following context(s): Social Play

Two calves are Sparring - one about 2 years old and the other about 4 years old. The smaller calf looks apprehensive standing in an expectant Periscope-Trunk posture. The larger calf lowers him or herself onto its knees.

This behavior is not uncommon to see when elephants of very different size Spar. It is always the larger elephant who Kneels-Down and we conclude that the motivation is to appear smaller and less threatening to their playmate. We count this as a form of Helping behavior. (Gorongosa, Mozambique)

Two males are Sparring - gm0009 with a broken leg is on the right and a slightly smaller male on the left. Gm0009 is forced back but then Pushes back against the other male. It gets rough and then gm0009 turns and Rump-Present and Tail-Swats allowing the smaller male to touch him Trunk-to-Genitals. The Trunk-to-Genitals seems to be a Conciliatory gesture. After this the younger male backs up and Kneels-Down. The two face one another while he is on his knees. 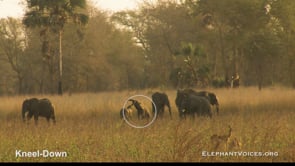 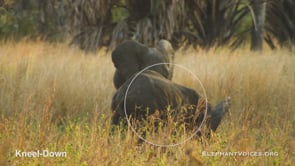 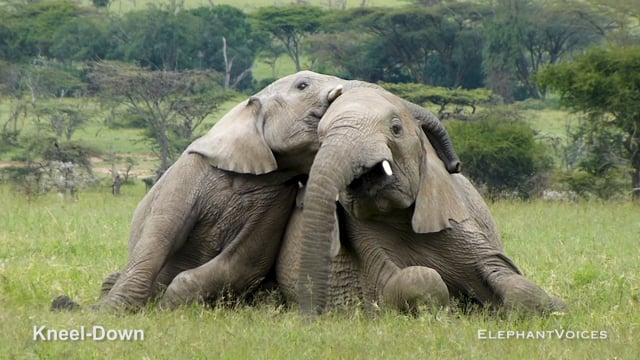