Standing on the periphery of a group, purposefully facing in the direction she wishes to travel by Body-Axis-Pointing, an elephant Waits attentively, Rumbling, ‘Let's go,’ every minute or so, while attempting to influence the other members of her family to move in the direction she is proposing. Her calling is associated with Ear-Flapping and she may adopt Intention-Movements, such as Foot-Lifting, Foot-Swinging, Ear-Flap-Slide, Ear-Slap and Walk-Wait - taking a few steps in the direction she wishes to go. Over minutes, or tens of minutes, other elephants may join the initiator, calling and Waiting and pointing, in a sense adding their voices and numbers to the roll call.

Matriarch, Provocadora, gf0012, is with her offspring in a subgroup of 6. They have been feeding. She gives two Ear-Flap-Slides and turns to face the direction she wants to go. Then Provocadora begins to Walk and gives a Let's Go Rumble while Ear-Flapping and stands Body-Axis-Pointing and Waiting for the others to turn around and come with her.

Her family has been pointing the other direction, but they turn and come with her and they walk off together. She gives another Let’s Go Rumble, Ear-Flapping and Body-Axis-Pointing and Waiting again. (Gorongosa, Mozambique)

Big Mama's family has been waiting for a long time in the hot sun and Big Mama is not ready to leave. There are cattle in the area and that may be the cause of their indecision. Finally Big Mama (marked with an M) indicates that she wants to go north and some of her family begin Walk-Waiting and making Intention-Movements that indicate they want to go south.

As the clip begins a sub-group begins to walk south and some give Let's-Go-Rumbles as you can see their Ear-Flapping. They Walk-Wait. They Walk-Wait again and engage in Body Axis Pointing south. Big Mama and her group meanwhile Body-Axis-Point the opposite way. Big Mama's group begin Let's-Go-Rumbling. The other group joins in. More rumbling seems to persuade the southern group to turn. They continue rumbling as they turn to align themselves with Big Mama. She waits and then gives several Ear-Slaps as she begins to move. All follow her. (Maasai Mara, Kenya)

Big Mama's family stand Waiting. Most adult members are oriented east Body-Axis-Pointing. Matriarch Big Mama (marked with an M in a circle) is not ready, though she stands with a forefoot forward. Some take a few impatient steps in a Walk-Wait. Then she begins walking and all follow her lead. She takes 12 steps and stops. Others keep walking and then stop and Wait for her next move. She half turns around and Urinates. She completes her turn, gives an Ear-Flap-Slide and walks back where she came from. All turn around and follow her. This is a lovely example of leadership. (Maasai Mara, Kenya)

There is a howling wind and so we have removed the audio. Members of Gina's family want to head across the plains. An adult female walks forward and Waits on the edge of the thorn trees Body-Axis-Pointing the direction she wants to go. She is joined by her calves and a young male. They stand Waiting and Body-Axis-Pointing. Later the calf Knubben (with a bump on her head) also joins her. Eventually the entire family heads in the direction the female suggested. (Maasai Mara, Kenya)

A family group has been drinking at the Kiturua and then Resting. An adult female begins to Walk-Wait, Body-Axis-Pointing. Soon another female follows her. They stand Body-Axis-Pointing. After some time another two females Walk-Wait and one of them gives a Let's-Go-Rumble. They stand Waiting for the last female who finally Head-Shakes (it seems she is not ready to depart) and turns and follows them. This interaction takes place over a period of 5 minutes; we have shortened the long periods of Body-Axis-Pointing and Walk-Waiting. (Amboseli, Kenya)

A family group has been drinking at the Kiturua and then Resting. An adult female begins to Walk-Wait, Body-Axis-Pointing. Soon another female follows her. They stand Body-Axis-Pointing. After some time another two females Walk-Wait and one of them gives a Let's-Go-Rumble. They stand Waiting for the last female who finally Head-Shakes (it seems she is not ready to depart) and turns and follows them.

This interaction takes place over a period of 5 minutes; we have shortened the long periods of Body-Axis-Pointing and Walk-Waiting. (Amboseli, Kenya)

A classic example of Let's-Go-Rumble. A family group is resting in the middle of the day. One young female wants to go to the swamp. She moves to the edge of the group and engages in Body-Axis-Pointing. She stands facing in the direction she wants to go and then takes a few steps (Walk-Wait) so that she is standing separate from the rest of the group, clearly pointing in the direction she wants to go. Then she begins walking and gives 2 Let’s Go-Rumbles (notice her Ear-Flapping and Ear-Folding).

Notice, after both calls, how she Looks-Back as if to see whether the rest of the group is following her. They don’t and she continues toward the swamp still calling. The clip includes two more calls, and she Looks-Back after the third and then stops to Wait after the fourth. There are more calls but then we are focused on the family. Eight minutes later they eventually follow her lead and they all head to the swamp to feed. Note that we are too far away to hear the Let's-Go calls clearly. (Amboseli, Kenya)

Prior to the start of this clip Angelina, her newborn twins, four allomothers (Arora B, Amora, Aspen and Allura), juvenile male Anson and a medium sized male (9 in total) entered the swamp and began to swim to the other side. A terrible drama unfolded there when one of the twins followed the adult male instead of Angelina. The male freaked out and Kicked-Back and Tusked at the twin who bobbed about like a buoy. Angelina finally went to the rescue and clashed with the male to get her infant back. As this was unfolding Abra (Angelina's niece) and her 3 year old calf swim toward them from the other side - Rather than continuing across the swamp, Angelina returned the twins to the safety of the bank on our side of the swamp. When Abra arrived there was a Greeting-Ceremony. At some point - and it is hard to be sure where this transition occurred - the calls seemed to change tenor to Cadenced-Rumbles and then to Let's-Go-Rumbles.

This clip is the point when Angelina begins Let's-Go-Rumbling. She calls, Waits 50 seconds and then begins to move (the clip is shortened). She faces the direction she wants to go and calls again and begins to walk. Allura (we believe) turns and steps with her as do her twins and another 4 year old female. She calls a third time 10 seconds after the end of the second call and all members of the group have oriented north with her. As she calls the third time she Looks-Back to check whether her twins and others are following her. She Walk-Waits and calls a fourth time again Looking-Back as her family members gather around her. She waits 8 seconds and Ear-Slaps and possibly calls again. She begins to walk in earnest and 10 seconds later gives another Lets-Go-Rumble calls again. All follow her. She Looks-Back again to check that the twins are coming. She gives one more Ear-Slap and continues walking.

Note that these calls are barely audible due to the distance we were filming from and the interference from the wind. However, with earphones we can hear all except one and can clearly see her associated Ear-Flapping. Note that Ear-Slaps are associated with all except the second Lets-Go-Rumble and there is a final one at the end of the clip where she may have Rumbled again. (Amboseli, Kenya) 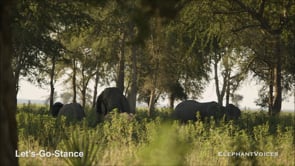 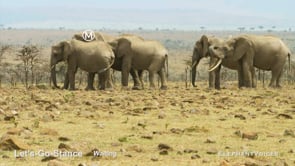 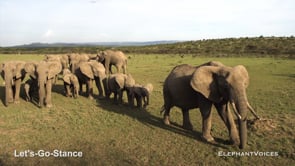 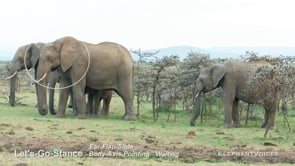 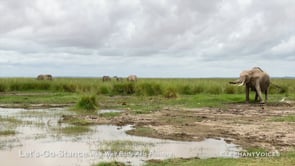 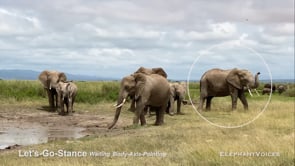 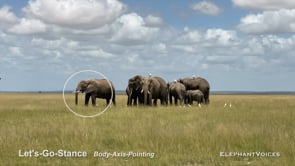 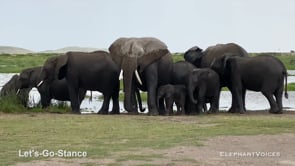