Using the trunk to gently touch, caress or fondle another elephant in a reassuring, comforting or affiliative manner. While adult females or juvenile females most often direct Caressing towards infants and calves, adults and juveniles may also Caress one another. In a Calf Reassurance & Protection context Caressing comes in many forms: Wrapping a trunk over the back and around the belly of a calf or over calf's shoulder and under its neck often touching its mouth, or reaching out to touch the genitals, face, legs, mouth, trunk. Caressing is often associated with Coo-Rumbling and calves typically respond with an As-Touched or Baroo-Rumble. Calls of distress by calves, e.g. Husky-Cry, Cry, Cry-Rumble, Roar, Roar-Rumble, also elicit Caressing.

While Caressing is a general term used primarily to describe the almost obsessive touching of a newborn by mother and allomothers, the behavior can be used as a collective term to described the Trunk-to-Body/Face/Genitals/Mouth that occurs in an Affiliative context between members of a family or bond group.

A young mother wants to depart but her newborn is sleeping. She gently touches her infant Trunk-to-Body to try to waken him. She touches him in this way many times and gives intention movements before he eventually gets up and follows her 15 minutes or so later. (Maasai Mara, Kenya)

In Big Mama's family. There is no audio. A calf is feeding and then suddenly looks to be slightly alarmed by something Ear-Spreading. A young female out of view reaches out to reassure the calf touching him Trunk-to-Mouth. The calf appears to vocalize - Head-Raising and Ear-Lifting and then high tails it into the group. The young female Caresses the calf with two more touches this time Trunk-to-Genitals. (Maasai Mara, Kenya)

Lorato is with Little E who is 3 days old. She is very busy touching Little E with Caresses - Trunk-to-Body and Trunk-to-Genitals. (Maasai Mara, Kenya)

Little E is 4 days old and has had an erection for a while. He seems to be dozing. Then Lorato comes along and starts fondling him. She repeatedly touches him Trunk-to-Genitals and also Trunk-to-Body holding him around his chest. At one point she seems to wake him up with all her touching. He seems a bit disgruntled and looks as if he is trying to Head-Shake. (Maasai Mara, Kenya)

Two infants are playing - an older male and younger female. A 5 year old juvenile female is keeping an eye on them - note her raised, attentive ears. She touches the male's genitals (Trunk-to-Genitals) the male’s genitals reaching between and around his hind legs. Then she reaches back to touch the mouth and face (Trunk-to-Mouth) of the little female. The little male reaches up Trunk-to-Mouth to touch the 5 year allomother. Adult female, gf0089, approaches and they seem to be associated with her. (Gorongosa, Mozambique)

This clip starts with Angelina, the twins and allomothers coming out of Enkongo Narok swamp were Angelina and the allomothers have just rescued one of the twins who was being tusked,lunged and kicked at by an adult male. The male was extremely unhappy about being followed by the infant. As they come out of the swamp Abra, arrived with her calf from the other side and there is a Greeting-Ceremony. The Greeting coincides with the Caressing of the twins by mother and allomothers who are reassuring them and making sure they are alright. This footage was filmed by Thomas Stafford. (Amboseli, Kenya) 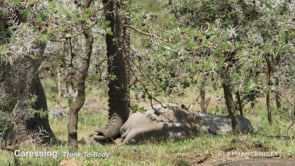 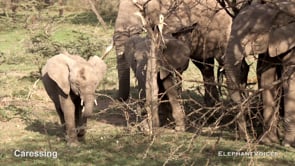 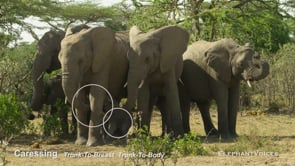 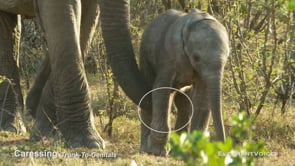 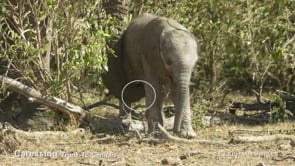 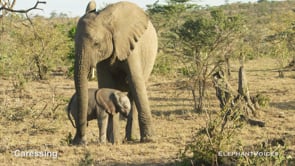 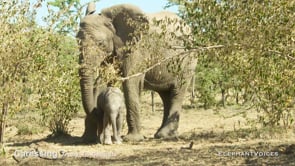 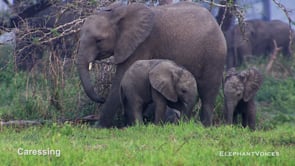 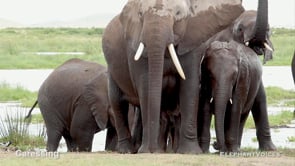