Following on from 'Dueling. Context: Aggressive (1)' the group with Ozora in estrus and Liaqat lightly Guarding her is moving toward the swamp. The same 15 year old male is still harassing her, though he is careful of Liaqat's proximity to her. As Liaqat follows behind Ozora the young male can be seen Backing-Away from her (and him). But, when Liaqat stops to Ear-Wave at the male behind him, the young male in front takes advantage, Advancing-Toward Ozora and threatening her. She Ear-Folds and Lunges at him and they Tusk-Clank. Liaqat appears in frame and the troublesome young male Backs-Away and Ozora Advances-Toward the young male Ear-Folding and Ear-Slapping. (Amboseli, Kenya)

In this case Ozora is in estrus and being lightly Guarded by Liaqat. A young male, about 15 years old, smaller than her and perhaps 15 years younger, is interested in her and, perhaps frustrated by her lack of interest in him, becomes aggressive. We use the term aggressive Sparring, but if one studies the behavior this is closer to Dueling.

There is tension around an estrous female. A new medium sized male has just joined the group and a second medium sized male with two broken tusks has taken exception to his arrival and threatens him Ear-Folding and Advancing-Toward him.

As this clip the two males stand facing one another Head-High and Ears-Spreading. They make contact and Tusk-Clank. The male on the right Lunges at the male on the left and forces him back. (Amboseli, Kenya)

A group of males is playing in a deep pool. Two are engaged in a playful Sparring match and clash a couple of times and Tusks-Clank together. (Amboseli, Kenya)

Two males are playing in a water hole together. The male in the foreground swishes his trunk through the water and then the second male approaches him floating on his side and they Spar and we hear a loud Tusk-Clank. The male in the foreground Orients-Away and then lifts his head in a look of surprise, as if the other male has 'goosed' him or something underwater. He gives a short breathy Trumpet as if in surprise, which we have included as an Alarmed-Trumpet. (Amboseli, Kenya)

Two young males are playing in a deep pool. They Spar briefly and Tusk-Clank. (Amboseli, Kenya) 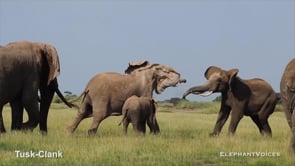 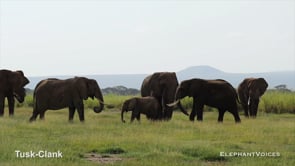 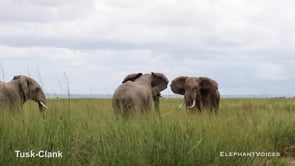 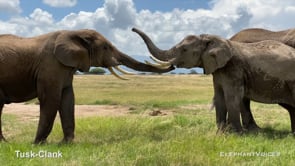 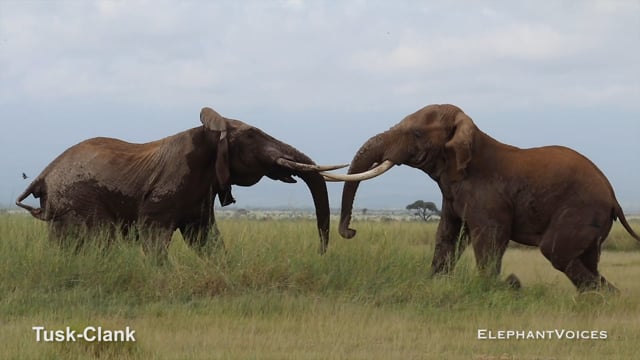 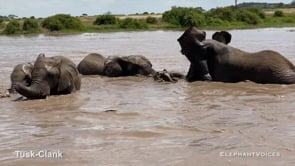 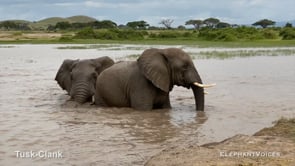 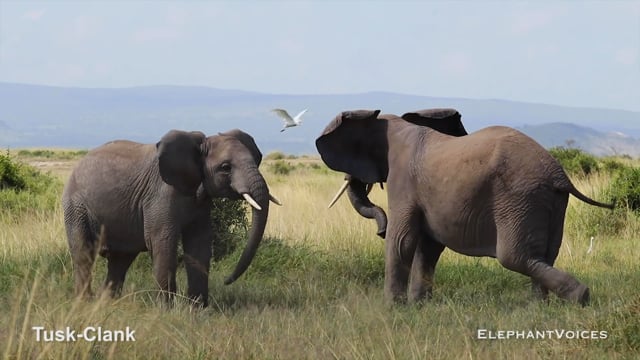 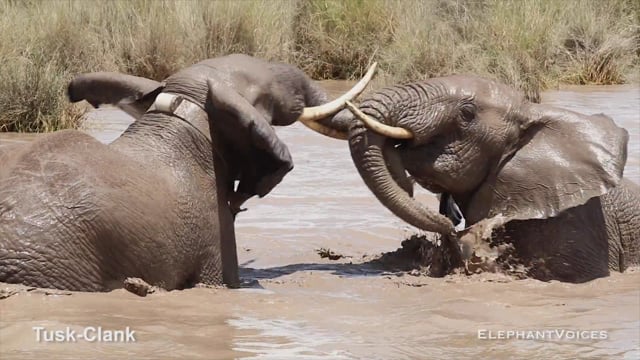