As the clip starts matriarch, gf0070, is walking our direction followed by her juvenile male. As he passes a tuskless female, possibly his older sister, he greets her Trunk-to-Mouth and purposefully rubs against her in a Social-Rub. Notice that as he does she Ear-Brushes him. (Gorongosa, Mozambique)

Gina's 10 year old male approaches his older sister (around 14 years) who is browsing on an overeaten tree stump. He moves very close to her, stops and backs up even closer, brushing (we can just hear the sound) up against her so that their bodies touch.

It may be that this is a friendly way of Supplanting her at the tree stump, because she Orients-Away. He seems to make a Conciliatory gesture to her reaching Trunk-to-Body. Then he sniffs half-heartedly at the stump and walks off. (Maasai Mara, Kenya)

Nalakite is carrying and eating a branch. Her two sons aged 6 and 10 are walking beside her. The 6 year old is walking away until he gets a sniff of her stick and comes back looking on the ground; Meanwhile her 10 year old is Soliciting-Food. She drops a bit of stick in an act of Food-Sharing. Neither male notices until later and they both reach into her mouth to Solicit-Food.

Meanwhile her 10 year old Social-Rubs against her and, simultaneously with the 6 year old Solicit-Food by reaching into her mouth begging for her stick. She pulls away and Grumble-Rumbles at them in a complaining tone. She purposefully removes another bit of the stick and drop it on the ground, in another act of Food-Sharing, for the 10 year old, who again Social-Rub against her and picks up the stick she has dropped.

The 6 year male has realized that there is a stick on the ground, but he can't reach it with her legs in the way. She continues to walk forward and he emits a Grumble-Rumble. The six year old still searches the ground blocking his mother's way and then, in his frustration, jabs her with his tusk - the Tusking causing her leg to buckle! She Redirects-Aggression swinging her trunk toward the 10 year old, who anticipating trouble emits a Grumble-Rumble.

Mum continues to walk and when the 6 year old is behind her she uses a back leg to Kick-Back. He Grumble-Rumbles and comes around behind her to the other side where he tries again. She gives him a Head-Swing and he Grumble-Rumbles. The older male clears out of the way. (Maasai Mara, Kenya)

Mama Little E is standing with Little E under her belly. He is exploring with his trunk. She reaches her trunk back and uses it to lift his head and Trunk-to-Infant-at-Breast, Guiding him to her breast, whereupon he Suckles. As Little E seem to finally Suckles, Grumpy Grandma f0412 arrives and Ear-Brushes and Social-Rubs against Mama Little E's rump and flank and then stands next to them for a moment before walking on. (Maasai Mara, Kenya)

A family group had paused here to Mud-Splash on the way to Lenkolong. Most have moved on, but this female stayed and Waited for a medium sized male to arrive. He reaches Trunk-to-Genitals and then Social-Rubs against her. She Ear-Brushes him and then engages in a deep Social-Rub against him. It is very intimate and friendly and we couldn't help but wonder what their relationship is. Might he be related to her? (Amboseli, Kenya)

Angelina Social-Rubs on an adult male who is moving through the family testing females. (Amboseli, Kenya)

A gaggle of calves in the Mabenzi family are playing together. They are in a big pile rubbing against one another in what might be termed Social-Rubbing. (Gorongosa, Mozambique) 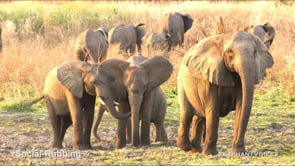 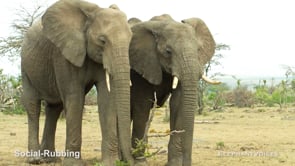 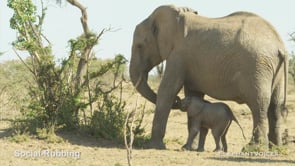 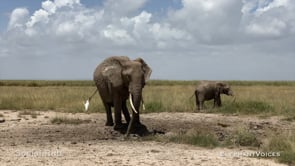 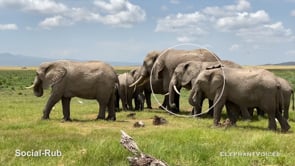 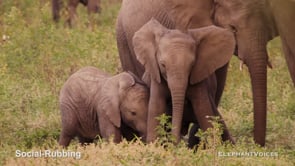