Amboseli elephant baby stuck in well - and then to orphanage

After a early morning recording session last week Blake and I were told by our ATE research assistant Katito Sayialel that an elephant baby was reported stuck in a well west of Amboseli National Park. We decided to go together, and followed behind the cloud of dust from the Amboseli Elephant Research Project vehicle. Despite lots of "shadows" in terms of cellphone contact with the maasai that had called the AERP team it didn't take long before we found the right location a few meters from the Tanzanian border. Helpful maasai with cows and donkeys were all around, and told us that the baby had been in the well and struggling since last night. To get a 350 pound elephant baby out of a well is not a piece of cake. And one thing is to get it up, another is to avoid ending up in the middle of an upset elephant family when the baby cries for help. Katito decided that we should try to look for the baby's family, to find out how realistic it would be to get the baby back to them after a rescue. She also got in contact with Kenya Wildlife Service, to get their advice and assistance. Unfortunately they were not able to come, so we had to move forward ourselves. 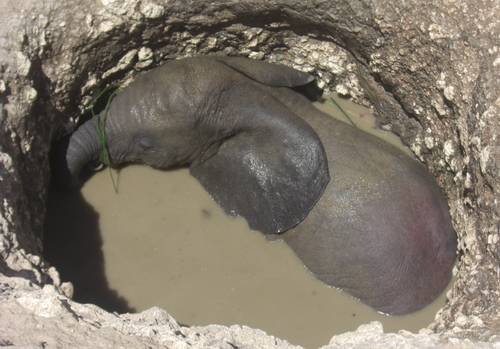 The well was not deeper than 1,2 meter, but deep enough to make it impossible for the less than one year old baby to get out. 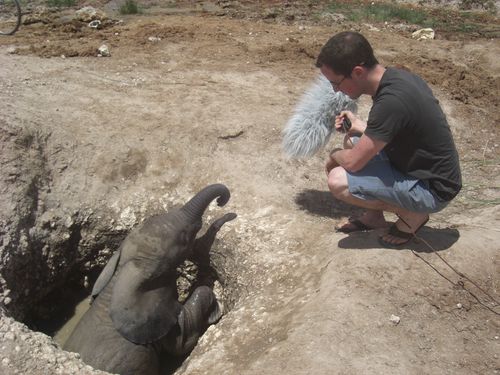 Since Blake's job for ElephantVoices during a 10 week field stay is to record rare calls, we had to try to get the low and very sad-sounding complaints from the baby on our Nagra digital recorder.

After having tried for quite some time to locate the family, and fearing that the baby could get serious injuries by the numerous attempts to get up, we had to take a decision what to do. Katito had already been in contact with the David Sheldrick Wildlife Trust (their Orphans Project) in Nairobi, and they were ready to come and pick up the baby by plane. We decided to lift the baby carefully up with ropes around the belly together with our maasai friends. Next step was to get him into the back of our rustic Landcruiser - the first elephant passenger ever... Luckily we had a foam-pad (normally used as camera support) to provide as head-rest. 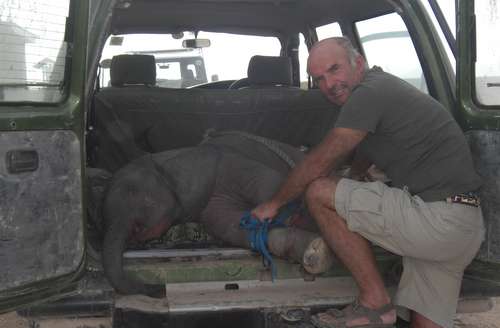 The baby was for natural reasons exhausted when finally out of the well, and quickly fell asleep when safe and sound in our field vehicle. In the photo we're at the Amboseli airstrip waiting for Sheldricks people.

The baby was well fed and looked strong and not too uneasy when arriving at the air strip, and an hour afterwards she was on the way to the orphanage in Nairobi with the very experienced Sheldrick staff that came to pick her up. I'm of course not happy at all that a baby elephant got separated from her family - but I do think what happened was the best solution considering the circumstances. That Blake and I had a very different day from what we expected is part of our story. We're crossing our fingers for the baby from the well.