Through ElephantVoices on Facebook we mentioned that Joyce will be working in Gorongosa for a couple of weeks. Below is a first Snippet from the field. She will try to update you in the days to come. 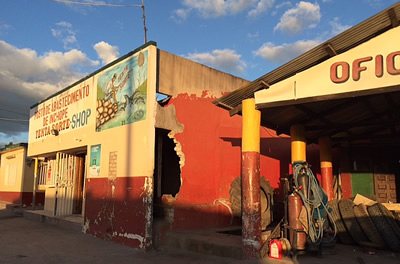 The journey from Sandefjord to Gorongosa was two days long - waking up at 04:15 for Petter to take me to the airport on 8th May and arriving at the park at 18:30 on 9th May, and a night spent in a Johannesburg Hotel. I was met at the Beira Airport, along the coast of Mozambique by wonderful, warm, Vasco Galante, Communications Director for the Gorongosa Restoration Project. Vasco was in Beira for other reasons and offered to pick me up - along with an old, spray-painted, steely-blue bicycle. More about the bicycle later.

One reason for the potholes is that in the 18 months since I was last here the timber trade has exploded. It was pretty terrible then and is now completely horrifying. Vasco said he passed at least 100 flatbed trucks loaded with the carcasses of massive hardwood trees. One after another they came lumbering down the road with their dreadful cargo bound for China; depots piled high with timber, and lorries waiting to load up for the port lined the road side. I literally felt sick. The Mining of Mozambique. The rich future of this country is being stolen before people’s eyes.

We arrived at Chitengo after dark and I dumped my things in my room before heading straight to the restaurant. Dinner was, as always, a lively social experience. The Gorongosa Restoration Project has a mission to produce the finest science centre of any national park in Africa - and so there are always fascinating people to meet and discussions to be had. Many of my old friends were there and I met new ones, too. The days ahead are going to be interesting!

After dinner I returned to my room to unpack and to contemplate my bicycle, #ElephantVoices' first field bicycle:-). I have never had a bicycle like her before. She - she is definitely a she - came from the streets of Copenhagen where she was donated after years of use to Baisikeli (bicycle in Kiswahili) and shipped to Beira (RETHINK Urban - Bicycle Social Enterprise: Changing Lives from Denmark to Mozambique). It immediately occurred to me that my bicycle needs a name. Ursula came, quite unexpectedly, to mind but I have been already been told that a funky bicycle deserves a funky name. I will await your suggestions! Later I'll fill you in on what I use the bicycle for - I assume you guess it has to do with elephants...