An adult female ignoring or rejecting the Solicit-Food or Solicit-Suckling advances of her vocally or physically Begging calf, by walking away or by physically locking a calf out of the breast or away from a branch by using variety of behaviors to repel her advances such as Foreleg-Block, Kick-Back or Body-Nudge or Head-Swipe.

The clip opens with a view of the Mabenzi family. The behavior in question is difficult to see because, Maya gf0020 is in the light in the foreground. The behavior occurs behind her with Marcela, gf0017, and her 4-5 year old calf. She has just been Double-Suckling her 4-5 year old male calf and a 6 month old female calf.

As the clip begins the older calf is still attempting to Suckle and she rejects his attempt. gf0017 reaches toward her older calf with a Trunk-to-Mouth as she twice uses a subtle (to the viewer) swinging motion of her hip/body - Body-Nudge - to block his access in a Reject-Suckle. (Gorongosa, Mozambique)

As her 6 year old male approaches and Solicits-Suckling. Matriarch and mother, Selengei, moves her leg deliberately back blocking his access to her breast. He emits a Suckle-Rumble and she relents and gives him access. (Maasai Mara, Kenya)

Adult female Rosetta and her 7 year old daughter are in view. Rosetta's daughter Solicit-Suckle using her trunk to grasp her mother's breast, but Rosetta Reject-Suck using a Foreleg-Block to block her daughter's access and a Body-Nudge to push her away.

Her daughter tries to cozy up to her mother by going in front of her and under her Social-Rubbing and then tries to get in on the other side - but there is no space. She stays for some moments standing face to face with her mother. After the end of the clip she tries around the back but that attempt does not work either. (Maasai Mara, Kenya)

Walli is feeding on Faidherbia drepanolobium while her two calves, a newborn female and a 5 year old male are trying to Double-Suckle. Unusually, Walli has not weaned her older male calf and he appears to be jealous of his younger sister. Walli is standing so as to block the 5 year old from access to her breast (Reject-Suckle) and then uses her body (Body-Nudge) and her hind foot to try to stop him (Kick-Back). Finally she tries backing up. (Maasai Mara, Kenya)

Walli is feeding on grass with two calves by her side, a newborn and a 5 year old male. The selection starts with the older calf exhibiting Solicit-Suckling and begging with a Suckle-Rumble. Just as he manages to Suckle, Walli moves forward, pushing her body into him in a Reject-Suck and he is thwarted.

Meanwhile the infant also Solicit-Suckling on her other side, but just as she begins Suckling (Double-Suckling), Walli moves forward. The infant runs forward between her legs and she uses front foot to try to guide it back. She again walks forward blocking the five year old male and he complains. Then she uses a slight Kick-Back - barely swinging her back leg out at him unsuccessfully.

The male tries again (Suckle-Rumble and Cry-Rumble) and she stops and both suckle (Double-Suckle) - briefly because she then uses both front and hind leg to Kick-Back with the foreleg being more of a Body-Nudge and he gives a Cry-Rumble. She walks on and the 5 year male runs around the back and tries to access form the other side. The newborn sees that male coming and gives a couple of Husky-Cries and Runs-Away. (Maasai Mara, Kenya) 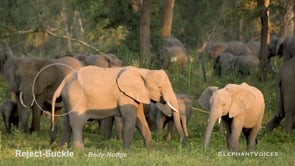 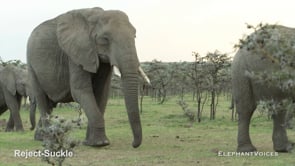 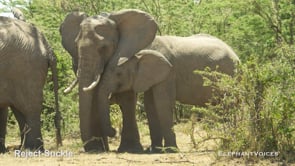 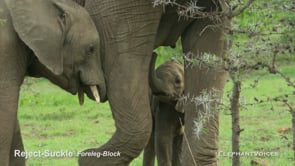 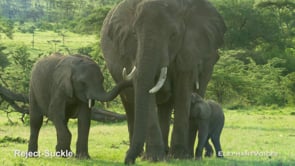