Family group rushing toward an adversary, predator or perceived threat en masse in a highly coordinated manner and with hostile intent. In an Attacking & Mobbing context Group-Advance may be preceded by Freezing, Periscope-Trunk, Bunching, Head-Swinging, Standing-Tall, Reach-Touch and Rumbling.

A Group-Advance is often the result of Coalition Building. Initiating individual(s) may rapidly approach their companion(s) coming along side her/them in parallel or face-to-face, they may vocalise in chorus, while High-Fiving - Rapid-Ear-Flapping, sometimes with Tusk-Clicking, Trunk-Twining and engaging in reciprocal Trunk-to-Mouth. Then, in unison, they Group-Advance toward the affronting individual.

In a Group-Advance against another group of elephants, it is typically an older female, often the matriarch, initiating the coming to aid of a younger family member who may have been kidnapped or attacked.

This Group-Advance by the C family was led by adult female Corajosa, who initiated the advance when we were over 300 meters away on the other side of the pan. She galvanized the others. As they come toward our vehicle you can see her - the tuskless female with the big U-tear in her ear. As they get closer they split into two groups - one bunch with Corajosa and Bullet going on one side of us and another with gf0029 and gf0080 and others going the other way - essentially surrounding us. (Gorongosa, Mozambique)

Matriarch, Provocadora, gf0012, takes a couple steps in our direction and stops and Contemplates us. She engages in Displacement-Feeding for 7 seconds and then Stands-Tall and stares at us. Then she adopts a Casual-Stance. All the while she is acting Vigilant.

Then she turns sharply to the left (from our perspective) and takes a few step in a Perpendicular-Walk and stops with her left foot lifted (Foot-Lifting). She is standing perpendicular or opposite to the others now. She stands with foot lifted for some time.

This movement seems to have been the que for the others as in another clip we see that Mwana Nzo and Valente begin a Group-Advance. Then Provocadora takes a very purposeful step toward us and we see all the other are coordinated in a Group-Advance. In the front row is Valente, Mwana Nzo, Maya and Provocadora. (Gorongosa, Mozambique)

We are with the Mabenzi family. Matriarch, Provocadora, gf0012, stands facing us and gf0020 reaches out Trunk-to-Mouth and gives her a Little-Greeting, Head-Raising and Ear-Lifting. gf0012 takes a couple more steps in our direction and stops and Contemplates us, Displacement-Feed for 7 seconds and then Stands-Tall and stares at us. She Displacement-Feeds and Displacement-Grooms again and then adopts a Casual-Stance. All the while she is paying attention.

She then turns sharply to the left (from our perspective) and takes a few step in a Perpendicular-Walk and stops with her left Foot-Lifting. She is standing perpendicular or opposite to the others now. She stands with foot lifted (Foot-Lifting) for some time. This movement seems to have been the que for the others as in another clip we see that Mwana Nzo and Valente begin a Group-Advance. Then Provocadora takes a very purposeful step toward us and we see all the other are coordinated in a Group-Advance.

In the front row is Valente, Mwana Nzo, Maya and Provocadora. They Periscope-Sniff as they approach. Marcela - gf0017 comes from the back and steps to the fore; Maya moves out of the way Tail-Swatting Marcela. Marcela Foot-Swings her right forefoot. Provocadora gf0012 Standing-Tall takes two small steps backward and Touch-Self and then Touch-Self again and again step back. They depart after the end of the clip. (Gorongosa, Mozambique)

We are with the C family and a bunch of young males. Corajosa begins a Purposeful-Walk with a Periscope-Trunk looking at us and repeatedly lifting her trunk in a Trunk-Sweep movement and moving her head/ear/body in a swinging motion. This movement seems to alert others to a problem and gets their attention and initiates Bunching and a Coalition. All move and Persicope-Trunk. Corajosa raises her trunk in Trunk-Sweep 5 times, Head-Swings 8 times and changes direction twice (left, right, left) using a Perpendicular-Walk before coalescing with the entire family and reaching and joining Bullet in a High-Five. Appearing behind her is gf0080 who gives an Ear-Flap-Slide as she walks with 1 month and a 4 year old calves.

Note that as Corajosa moves she blows heavily out of her trunk in what must be a snort-like exhalation. The meeting with Bullet involves the two vocalizing, Reciprocal-Trunk-to-Mouth, Mouth-Opening. Corajosa kind of crashes into her and almost seems to direct her forward as the pile of elephants turns to come for us in a Group-Advance. At this point all are together with gf0080 just behind them and we think Nomada, gf0003, just to Bullet's right. They march on us with the power and determination of a freight train!

Corajosa Freezes and Listens and then continues. The young male group coalesces with them in a tight Bunch. Note that this sequence was originally filmed in slo-mo. We have sped it up and added audio from another camera shoot within minutes of this footage. The audio is not accurate and does not include the rumbles of the elephants. (Gorongosa, Mozambique)

The Mabenzi family are Bunching as they walk in a Group-March toward Lake Urema. They are on their way to water and are caught out in the open and are concerned - adopting Periscope-Trunk. Then, in a tight formation, they turn toward us in a Group-Advance before leaving us turning back the way they were headed with Mwana-Nzo taking up the Rear-Guard. (Gorongosa, Mozambique)

Provocadora, gf0012, stands Contemplating us with a J-Trunk. Her calf adopts a Periscope-Trunk as she tries to Solicit-Suckling, but Provocadora has other things on her mind and begins a Purposeful-Walk toward us as she initiates a Group-Advance. As she Advances-Toward the vehicle the filmmakers start the car, she pauses, raises her head and continues to advance as she Ear-Slaps audibly. She pauses again and, with a J-Trunk, Looks-Back toward the others as if to see whether they are with her. Then she proceeds toward us with the others backing her up in a Group-Advance.

Mwana Nzo, gf0016, takes over from Provocadora leading the Group-Advance with a mouthful of food. Behind her Provocadora moves toward Valente, gf0013, and displays Open-Mouth as she reaches Trunk-to-Mouth to Valente. We see Provocadora raise her head - Head-Raising - in a High-Five and hear what sounds like a Social-Trumpet. This is part of coalition building as they join forces in this Group-Advance instigated by Provocadora. (Gorongosa, Mozambique)

This clip is taken from a longer sequence of behavior of the I family whom we find out in the open where they feel vulnerable. The shot starts as Isabella,gf0038 initiates a Group-Advance with a Perpendicular-Walk (not directly toward us). She turns around, goes back to iJunia and they do a mini High-Five which marks the beginning of the Group-Advance. Again, Isabella takes the lead and Charges at us with the rest coming behind (this part is not included as we are driving).

Then iJunia, gf0005, the matriarch also Charges. We stop and iJunia slows her Charge to a Bow-Neck-Advance-Toward. She takes the lead with Isabella, gf0038, by her side and a tiny baby in tow. iJunia gives a Trumpet-Blast and Head-Dips. They stop near us and Isabella reaches Trunk-to-Mouth to iJunia. They Bunch facing us Standing-Tall and Head-Swinging and iJunia Head-Dip-Touch-Ground. The rest of the family advances with them except iJunia's son Ignaçio who walks up unbothered and joins them later. (Gorongosa, Mozambique)

Having already seen us off, the Mabenzi family pauses for an End-Zone-Dance with the two main participants being Valente and Mwana Nzo. Then we see Provocadora, gf0012, on the far right, initiate another Group-Advance. They take an arc away from us before turning and coming for us with Mwana Nzo in the lead flanked by Marcela and Valente. Notice how Valente purposefully knocks down a dried branch, Bush-Bashing, and someone is giving Trumpet-Blasts. (Gorongosa, Mozambique)

Valente, gf0013 on the right initiates a Group-Advance, which is taken over by Mwana Nzo, the tuskless, who Charges at us at the lead of the group. Note her Forward-Trunk-Swing at us. Someone is giving Trumpet-Blasts - most likely Mwana Nzo. (Gorongosa, Mozambique)

After several short Charges and Group-Advances the Mabenzi family decides to march us out of the forest. This is before Provocadora arrives and initiates the major Group-Advance and serial Charges that lasts some 6 minutes.

This clip starts with Valente leading a Group-Advance. We can see their determination in their stride. As she gets closer we drive away slowly. You can hear us discussing what to do, as we try to figure out the best way to habituate them without being attacked. This day was a failure as we seemed only to encourage them and they were highly successful. As we drive Valente picks up speed and begins to Charge while the rest all back her up. She does a lot of Trunk-Dragging and then Forward-Trunk-Swings at us as she stops. We stop and turn of the engine as they engage in a celebration of their achievement Head-Raising, Rumbling, Social-Trumpets, Open-Mouth and Rapid-Ear-Flapping. They stand looking at us until a few stragglers arrive.

As Marcella goes to them, tuskless Mwana Nzo initiates another Group-Advance with Valente, Marcella and everyone backing her up. Again they Bunch and celebrate Rumbling, Head-Raising and Rapid-Ear-Flapping. You can hear Joyce comment, "Just go back and eat your breakfast girls. You are so silly." They continue to Bunch and Listen. Then Mwana Nzo turns away from us and stands with hind foot lifted. Suddenly Marcela Charges at us, Bob start the car and inadvertently hoots the horn and all the elephants join Marcella in another Group-Advance. Joyce laughs - excited by their amazing team work and extraordinary behavior that we are documenting. (Gorongosa, Mozambique) 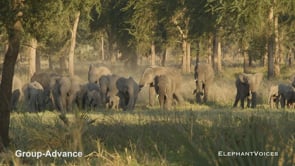 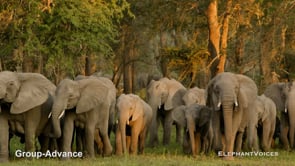 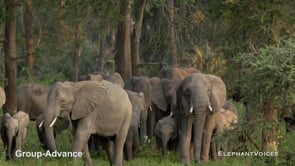 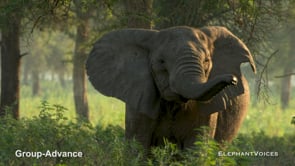 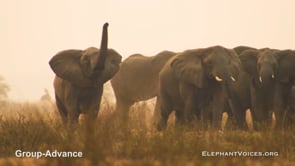 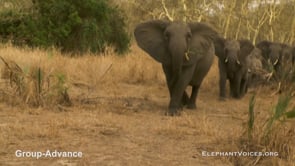 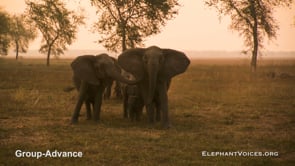 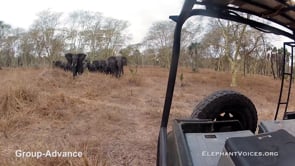 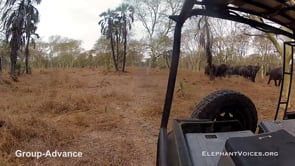 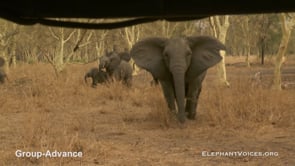