A 1 year old female has moved closer to Pat Derby's 1 year old male and begins feeding on a bush right next to where he is feeding. He pauses in his attempt to dislodge a sapling and pushes her away. Afterwards she reaches her trunk to his mouth, Trunk-to-Mouth, as if in a Conciliatory gesture. (Maasai Mara, Kenya)

Little E gets too close to Grumpy Grandma, f0412, and she Kick-Back and Little E Roars, Lorato reaches out to him, Trunk-to-Mouth. f0412 Kick-Back again, he Roars again, and then Grumpy Grandma Tusks him and he Roars. As part of the Tusking movement she curls her trunk and touches him in a gentle Conciliatory way and seems to direct him straight toward his mother (Shepherding).

Mama Little mother reaches out with her trunk and directs him to her breast (Trunk-to-Infant-at-Breast) and he immediately Suckles. She again Trunk-to-Infant-at-Breast. When f0412 Tusks Little E, allomother Lorato scoots around the front and then Back-Toward Grumpy Grandma to stand next to Mama Little E such that Little E is protected in between them. (Maasai Mara, Kenya)

Little E is 6 days old. Latino is feeding next to Mama Little E and Little E wanders over and begins sniffing around her back end. She Kicks-Back almost knocking him over. Immediately, as this is happening, Latino's son, an 18 month old comes in with his ears forward in an aggressive posture Pushing Little E. He clearly didn't want him near his mother. A fool for punishment, Little E tries again and the 18 month old Pushes him again. Then he reaches out Trunk-to-Genitals in a Conciliatory gesture. We can't tell if there are any vocalizations due to the wind. (Maasai Mara, Kenya)

The clip starts we see V-Notch Back-Towards Grumpy Grandma, f0412, who is feeding on a bush. It appears that we have missed a bit of behavior and we are guessing that Grumpy Grandma Pushed Vi-Notch away. The second section the end of a Head-Swipe - V-Notch backed off but immediately tried came back and reached her trunk to her mother (Trunk-to-Mouth) in a Conciliatory gesture.

Then after some time Grumpy-Grandma Head-Swings gently at her for a 3rd time but V-Notch is persistent and comes right back in and again reaches her trunk to her mother's mouth in a Trunk-to-Mouth as if in a gesture of Conciliation. (Maasai Mara, Kenya)

Grumpy Grandma (f0412) is browsing on a bush. Her adolescent daughter V-Notch reaches Trunk-to-Mouth to her mother in a Conciliatory gesture to solicit sharing food. Grumpy Grandma responds by Tusking her away. (Maasai Mara, Kenya)

This is a short section of a close to three hour Escalated-Contest in which an older male intervenes to help the male with the broken tusks at least 5 times. In this last incidence of this behavior the older male enters from the right and immediately the broken tusked male Advances-Toward the longer-tusked male with a very aggressive posture - Open-Mouth, Trunk-Curled-Under as if to bounce or drag, Ears-Folded.

Marshmallow of the MB family has a new infant who is asleep on the ground. She has the help of two allo-mothers in looking after it. A young male has just arrived and is Kicking the infant - in an effort to get it out of the way. The allomother at the back is concerned and we see her reach to the infant with her trunk. Then she comes rapidly to the front of the group and Backs-Toward the infant in an effort to place herself between the two. The second allo-mother seems to feel she was too close and Pushed her gently away and immediately gives her a Trunk-to-Genitals touch in a Conciliatory gesture. A minute later, the second allo-mother Ear-Brushes her as if in a second Conciliatory gesture. (Amboseli, Kenya)

This clip takes place after Qadija Mates and there is a Mating-Pandemonium, during which Qoral's infant gets knocked over. After much comforting he begins to Suckle with audible sucking sounds. The females are still giving Coo- and other Rumbles. Qaskazi, who inadvertently knocked the infant over Backs-Toward Qoral and Kicks-Back and Tail-Swats trying to get her attention or seemingly an appeasement or conciliatory gesture. Qoral eventually tires of it touches her Trunk-to-Genitals - also a conciliatory gesture and then tries to Grasp-Tail. (Amboseli, Kenya)

There are 3 adolescent/juvenile males. The male on the left with the broken leg, is gm0009. He is the oldest and was a bystander while the other two were Sparring. We don't see what happens prior to this scene, but the smallest male, facing us, appears to become angry and overly aggressive, attacking the male with his back to us, Ramming into him and forcing him back. It seems as if the male with his back to us may have done something to deserve the anger.

Then gm0009 seems to intervene and the two pause as if thinking better of the game. The male with his back to us Touch-Self. In what appears to be an act of Conciliation gm0009 touches the smallest male, who seems to Rump-Present and gm0009 leans into him and touch him Trunk-to-Genitals.

The next scene shows the little aggressor, in the middle and the other two in a Reach-Over. Then both step back, gm0009 Trunk-Sucks and the other male Touches-Self again. It is hard to see whether gm0009 might have touched the little male's genitals again. (Gorongosa, Mozambique)

Two males are Sparring - gm0009 with a broken leg is on the right and a slightly smaller male on the left. Gm0009 is forced back but then Pushes back against the other male. It gets rough and then gm0009 turns and Rump-Present and Tail-Swats allowing the smaller male to touch him Trunk-to-Genitals. The Trunk-to-Genitals seems to be a Conciliatory gesture. After this the younger male backs up and Kneel-Down and engages in Tusk-Ground. The two face one another while he is on his knees. 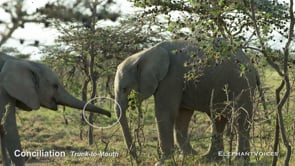 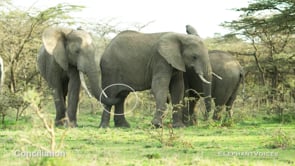 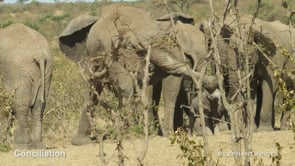 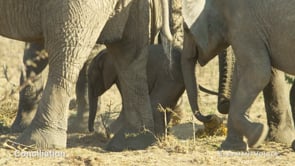 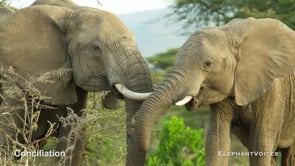 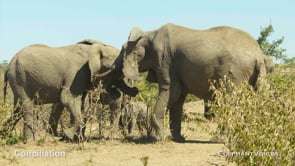 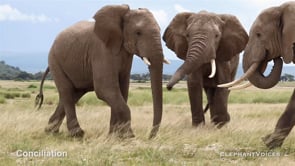 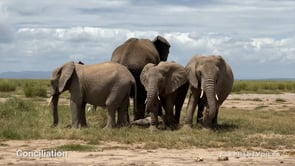 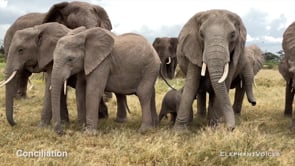 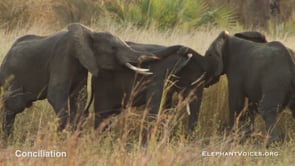 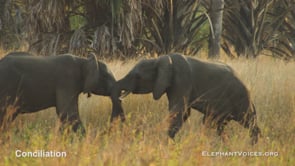