Opening the eyes wide, sometime exposing the ‘white’ of the eye. An elephant normally casts is eyes downward. An alarmed, frightened or highly excited elephant may open its eyes wide. Eye-Widening may also be seen during intense Affiliative and excited Social Play contexts.

A mother and calf walk past the filming vehicle. Both mother and calf are slightly concerned. The mother changes directly slightly, while the calf exhibits Eyes-Wide and Ears-Stiff. (Maasai Mara, Kenya)

Based on the angle of this shot I assume that V-Notch sees the cameraman out of the car filming from the ground. She exhibits Ears-Stiff and Eyes-Wide as she walks past him. (Maasai Mara, Kenya) 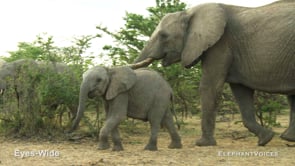 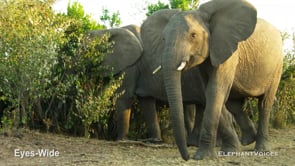