Turning to present posterior and walking backward toward another or other, often higher-ranking, elephant(s). Back-Toward may be observed when individuals (usually adult/adolescent and juvenile females) attempt to join or move to a more central or advantageous position in a gathered group such as during a Bonding-Ceremony, when Bunching, when joining a Resting group, or when an adolescent female approaches a mother with a newborn. Males may engage in Back-Toward during Social Play with a larger partner.

Back-Toward may sometimes be a gesture of appeasement to avoid an aggressive response by a larger elephant, or, within families, as a signal of respect - such as when joining a Resting group, or, in the case of Bunching it may be a way to keep eyes, ears and tusks pointed toward the perceived threat. All age sex groups may Back-Toward the carcass or bones of a dead elephant.

The clip is of the Mabenzi family feeding on seed pods in the Faidherbia woodland on a wet and misty morning. We can see an adolescent female move very purposefully backwards from one side of the group. She Backs-Toward the two lead females, Mwana Nzo, gf0016, and Valente, gf0013, who are feeding. As she walks backwards she is Tail-Swatting. It is not clear why she is changing positions nor why she chooses to do so backwards. (Gorongosa, Mozambique)

Little E is 4 days old and is trying to Suckle from his mother. Adolescent female V-Notch approaches from the right giving a Little-Greeting Rumble and Backs-Toward Mama, then Lorato approaches and we hear another Little-Greeting-Rumble as both try to get close to Little E. (Maasai Mara, Kenya)

V-Notch comes out of bushes and then sees the filmmakers - gives a little start and then, aiming for some shade under the tree she Backs-Toward Matriarch f0412 Ear-Brushing her as she moves into place. We hear Little E give a Husky-Cry in the background. (Maasai Mara, Kenya)

Lorato comes out of the bushes and finds the filmmakers. She threatens them with a little Head-Jerk and a Head-Shake, and then Backs-Toward Mama Little E and Little E who are resting under the shade of a tree. (Maasai Mara, Kenya)

The filmmakers did not catch the entire interaction. We see V-Notch politely Back-Toward her mother who is feeding on an acacia bush. V-Notch has a branch in her mouth which she likely got from her mother and we see her backing up for more. In later clips we see her feeding side by side with her mother who gently Pushes her away. (Maasai Mara, Kenya)

Selengei's family is resting under the shade of a tree in the heat of the day. An adolescent female on the right is in partial sun and then appears to be pushed further out into the sun. She stands there for some time - very dozy - and then appears to make a calculated decision to politely Back-Toward matriarch Selengei to achieve more shade. She moves very slowly and gently into a position in full shade. (Maasai Mara, Kenya) 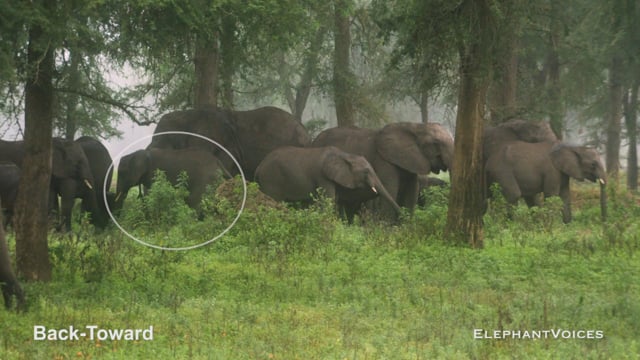 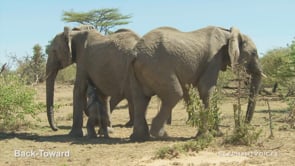 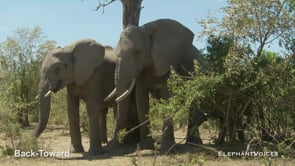 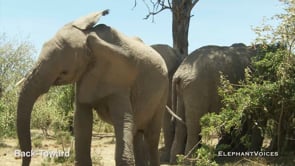 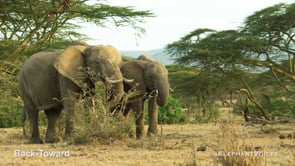 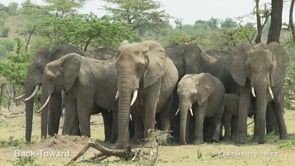