Standing or moving with the ears fully extended at ~90 degrees from body. An elephant normally holds its ears in a relaxed position such that they rest approximately 10-30 cm from the side of the body. In this relaxed position the ears do not appear stiff or tense, lifted, spread, or pressed against the body.

Elephants may Ear-Spread when facing an opponent, predator or presumed threat, presumably for the purpose of appearing larger. Elephants may also spread their ears when they are Listening, surprised, alarmed or otherwise aroused. All age sex groups engage in Ear-Spreading.

Allomother, Lorato, defends Little E when he is 5 days old. She is concerned by the presence of the vehicle and exhibits Standing-Tall and Ear-Spreading as well as scraping the ground with her foot in a cross between Kick-Dust and Foot-Scuffing. (Maasai Mara, Kenya)

A 5.5 year old juvenile female and 1.5 year old male stand together on a termite mound. The male has been sniffing dung. The female is concerned about the filmmakers presence, but perhaps also about the dung. She reaches past dung and around his mouth and touches him gently Trunk-to-Mouth covering his mouth. Then she uses her hind foot, in a protective gesture, to Shepherd him to safety behind her and climbs to the top of the termite mound and displays Standing-Tall and Ear-Spreading, as if to protect him. Then, feeling a little silly and unsure she places her trunk in her mouth (Trunk-Sucking) and Backs-Away off the termite mound in a Bow-Neck posture and disappears behind a bush. (Maasai Mara, Kenya)

Little E is 16 days old. His family is trying to get across a rocky river bed. Mama Little E slips and falls and lands on Little E. Little E roars, someone snorts and females rumble and display Tail-Raising. We see V-Notch, left, and Latino (right) whirl around and Redirect-Aggression at us. Both display Ear-Spreading and Standing-Tall and they both Head-Dip-Touch-Ground as they check to see what the problem was - check out the rocks as if to see what went wrong! Latino (right) also Kicks-Dust/ Foot-Scuff. Latino and Mama Little E touch (Trunk-to-Body) Little E. (Maasai Mara, Kenya) 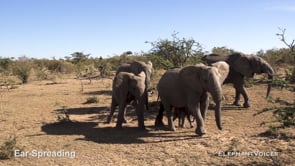 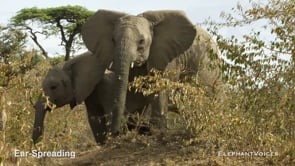 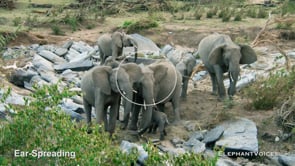