An attentive elephant self-grooming when grooming is inappropriate. May include throwing dust, vegetation, etc. onto self. Performed in conflict situations such as in Aggressive, Submissive, Conflict & Confrontation, Courtship, and Social Play contexts when an individual shows incompatible tendencies, such as fleeing versus attacking.

Little E is only 4 days old. Allomother Lorato has defecated. Little E is interested. Mama Little E touches his genitals (Trunk-to-Genitals)and his anus, holds his tail and then Trunk-to-Genitals again three times. Little E then begins to Comfort-Suckle from allomother Lorato who adopts a Suckle-Stance. He stops and Mama Little E comes over and touch him under his mouth (Trunk-to-Mouth) and then along and up his trunk as she turns slightly away from allomother Lorato - Guiding him away from Lorato and toward her. He turns toward her. As this is taking place, Lorato engages in a series of Apprehensive behaviors - Touch-Face, Trunk-Sucking and then steps forward and begins Displacement-Grooming - Dusting but not really. Mama Little E walks on behind Lorato and Little E goes in front of her. As he passes by Lorato touches his genitals (Trunk-to-Genitals). (Maasai Mara, Kenya)

Little E is four days old. Lorato is with Little E and is looking a bit insecure finding herself "alone" with him. She scrapes her toes on the ground in a movement that is looks like she is going to dust but doesn't - Displacement-Grooming. She exhibits other signs that she is Apprehensive Ear-Spreading and Touch-Self. (Maasai Mara, Kenya)

An adolescent female is in a family group with f0470. Both females stand facing car in slightly threatening posture. The adolescent female is Apprehensive about the proximity of the car - both curious and trying to be tough, she engages in Displacement-Grooming. (Maasai Mara, Kenya) 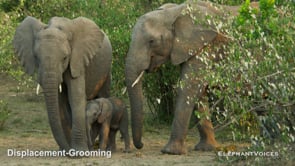 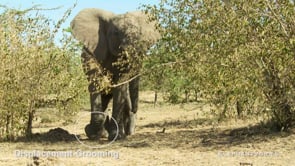 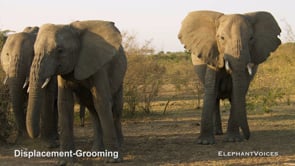