Lifting and holding the trunk up in an S-shape, similar to Periscope-Trunk, but with upper bend of the trunk resting against the elephant’s forehead. Circus-Pose appears to be an anticipatory gesture - an elephant waiting for something he or she expects to happen. We have also observed Lorato, an individual adolescent female in Maasai Mara, Kenya, adopt this posture repetitively as an idiosyncratic behavior.

Little E is two days old and allomother Lorato Backs-Toward the others to form a tight group. Then she adopts her idiosyncratic Circus-Pose. She seems to do it when she is Waiting or Resting, in this case Waiting for Little E to come closer. Audio ruined by wind. (Maasai Mara, Kenya)

Little E is three days old and is with his mother and allomother, Lorato. His mother is browsing, but Lorato again adopts her idiosyncratic Circus-Pose. As Little E trundles toward her, she abruptly turns 90 degrees in a movement designed to attract Little E's attention. It works. He follows her and she puts her trunk down to touch him. Audio ruined by wind. (Maasai Mara, Kenya)

Little E is four days old and is with his mother and allomother, Lorato. His mother is browsing, while Little E sleeps. Lorato stands nearby dozing while in her idiosyncratic Circus-Pose again. She seems to adopt this position when Waiting for the opportunity to engage with Little E or Resting. (Maasai Mara, Kenya)

Little E is four days old and is with his mother and allomother, Lorato. Mama Little E leads the way and stops to browse on a bush. Notice how Lorato follows Mama Little E and then comes to an abrupt halt and adopts her Circus-Pose as she Waits. (Maasai Mara, Kenya)

Little E is two weeks old and is with allomother, Lorato. She engages in two of her idiosyncratic behaviors at once. First she climbs on a Croton bush (Stand-Over-Bush) and then she adopts a Circus-Pose. We have shortened this rather long posture but she pays attention to the location of Little E. (Maasai Mara, Kenya)

Fudge of the FD family stands Contemplating us in a playful and attentive Circus-Pose. (Amboseli, Kenya)

Three males are Sparring. The one on the right stands expectantly in a Circus-Pose as he waits for his partners next move. (Amboseli, Kenya)

A family group is Mud-Splashing at a water hole. The adult female on the right wants to depart and adopts a Let's-Go-Stance. This clip is a short section of her standing facing the direction she wants to go, Body-Axis-Pointing and Waits for 4.5 minutes until the matriarch finally decides to move on. She spends most of the time in a Circus-Pose. Toward the end (not included in this clip) she gives a Let's-Go-Rumble. Then the female she is Waiting for begins to move and they walk off as a family. (Amboseli, Kenya)

It is unusual for females to fight with males, but when it occurs it is likely between an adult female and a teenage male and typically when the young male is behaving inappropriately toward her or toward a member of her family. In this case Ozora is in estrous and being lightly Guarded by Liaqat. A young male, about 15 years old, smaller than her and perhaps 15 years younger, is interested in her and, perhaps frustrated by her lack of interest in him, becomes aggressive.

We use the term aggressive Sparring, but if one studies the behavior this is closer to Dueling. Ozora is angry at him Ear-Folding and Ear-Slapping and holding her Head-High and Chin-Out. She Backs-Away and he Advances-Toward her. She again Ear-Folds and Ear-Slaps with Head-High and Chin-Out. She Backs-Away again and he presses his advantage. She Lunges at him and they clash and we hear Tusk-Clanks. She Reaches-High, and Lunges at him clashing tusks again. She adopts Circus-Pose and Lunges again then as he Backs-Away she Reaches-High again. She Advances-Toward him Ear-Folding and Ear-Slapping as he Backs-Away. (Amboseli, Kenya)

There was tension around an estrous female and two males began an Escalated-Contest which lasted close to 4 hours. During this period they engaged in 3 bouts of Dueling. After two of these both males engaged in Check-Tusk. This clip is the last Dueling bout.

Marcela, gf0017, of the Mabenzi family stands in a Circus-Pose in an attentive, expectant way. She is being Suckled by a 3 year old. (Gorongosa, Mozambique) 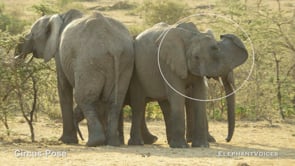 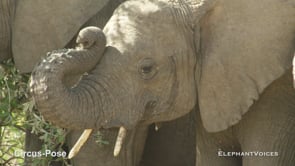 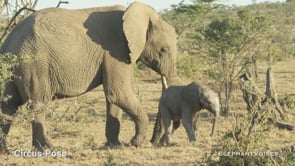 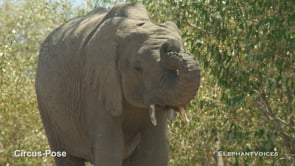 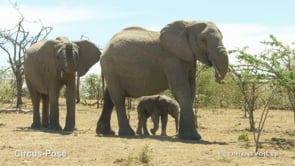 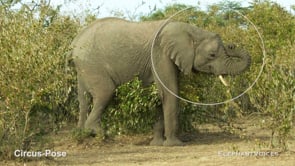 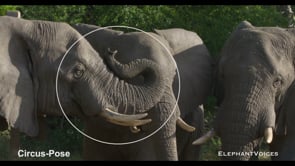 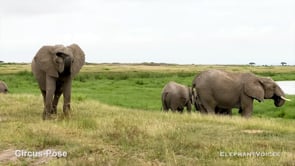 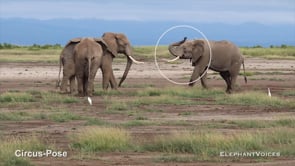 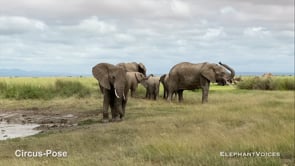 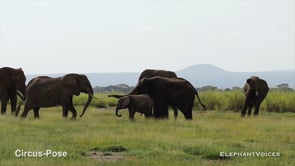 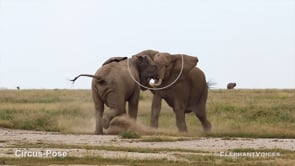 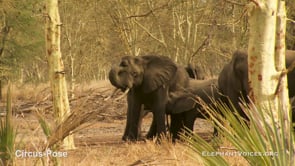