Standing or Walking with the trunk draped over a tusk in a relaxed and “casual” manner. Predominantly a posture adopted by musth males as approaching a group females or while in their presence and moving through the group. Also observed by adult males and females in Attentive and Contemplative contexts.

This is a shortened section from a longer clip. Musth male, Gogogo, gm0001 is moving through a group testing females. He tests a young female in the Mabenzi family who I believe is daughter to Marcela, gf0079. (Gorongosa, Mozambique)

Musth male (m0023) walks through a group. He has been testing females and then adopts Casual-Stance as he walks and then stops to sniff dung. (Maasai Mara, Kenya)

Musth male Pascal has just Mated with Amparo and is Resting as he continues to Guard Amparo. He scratches his ear and temporal gland with his trunk and then adopts a Casual-Stance. He appears to hear something out of view that attracts his attention and then he returns to his more relaxed posture as he Guards Amparo. (Amboseli, Kenya)

Musth male Pascal has just Mated with Amparo and is Resting as he continues to Guard Amparo who is just in front of him. He adopts a Casual-Stance. When Amparo steps forward he follows her standing within a couple of meters of her. (Amboseli, Kenya)

Pascal is in full musth and has spend the last 15 minutes engaging in various musth displays. Now he walks toward us in a Casual-Stance. Note his stiff-legged Foot-Scuff. He pauses at the water's edge and engages in Trunk-Curl. (Amboseli, Kenya) 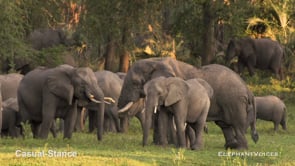 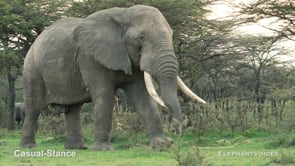 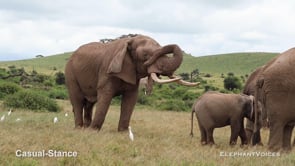 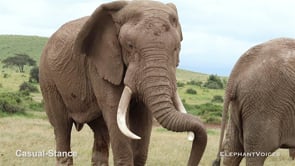 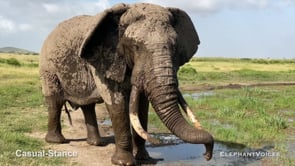