An individual using the head to forcefully butt and then press down on an adversary. Often observed during physical attacks on vehicles. 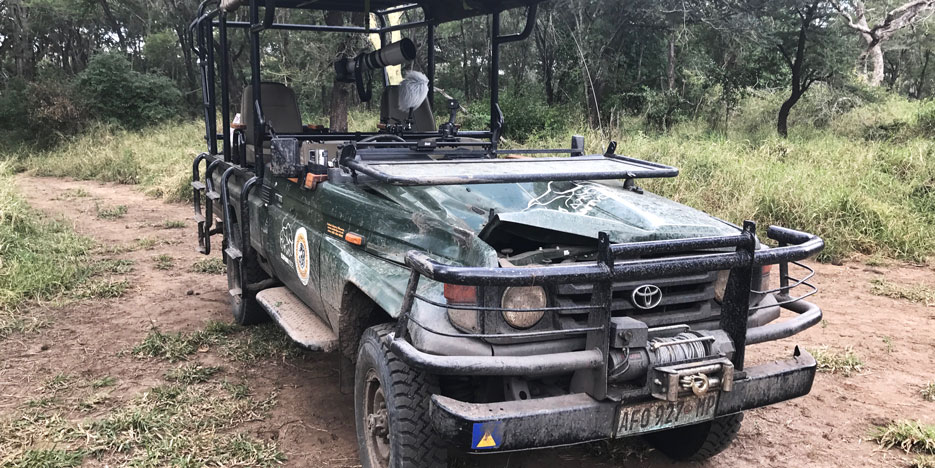 This behavior occurs in the following context(s): Attacking & Mobbing

We saw a group some 120 m ahead of us on the left side of the track at about '11:00'. They were wet and appeared to be at a mud wallow. We drove forward a little way, staying on the track, stopped the car and turned off the engine again. We were still about 100m from the group, but could see that they were the V family. We drove about 20 m forward and then another 15 m - to reach higher ground - and stopped to take more photographs. We were then about 80 m from the elephants who were off the track to our left (at '9:00'). At that point we noticed a few more individuals on the other side of the mud wallow in the forest at about 100m from us at '11:00'. We could not immediately identify them, but thought that they must be part of the V family.

At 12:13 one of these elephants - a large female - began moving rapidly toward us. Joyce took a couple of photographs of her and then panned back to the rest of the group who were Freezing/ Listening. Petter was filming. The female Charged toward us through the long grass and out onto the track in front of the vehicle. At that point Joyce commented, 'Oh my God, I know her', realizing that she was gf0073 (AB family) and not a member of the V family. She Charged us from the front stopping at about 4m from the car. gf0073 paused in the middle of the track Standing-Tall, assessing her next move. Then she continued across the track to the right of us. Joyce commented to Petter, 'she’s not a good one, that one'”. From the right side she lunged a few steps toward us and then went behind a tree 'hiding', where she watched us from a fork in the tree trunk.

During this commotion the V family moved closer toward us and we were concerned that they would Mob us from the left, but they kept their distance, Standing-Tall and Listening. We took some photographs of them and then at 12:15 we noticed gf0073 was coming again. She Charged at us and as she came within 3 meters she put her head down and began shuffling toward us. Joyce shouted at her, we both shouted at her, but we were unable to deter her. She rammed into the front right side of the vehicle and pushed it so that it was lifted off the ground. She Head-Butted us repeatedly for 12 seconds. Petter turned on the ignitions and she backed away as we continued to shout. When she had backed to a distance where we thought we could escape we drove off quickly. She gave chase - running after us for some 200 m. (Gorongosa, Mozambique) 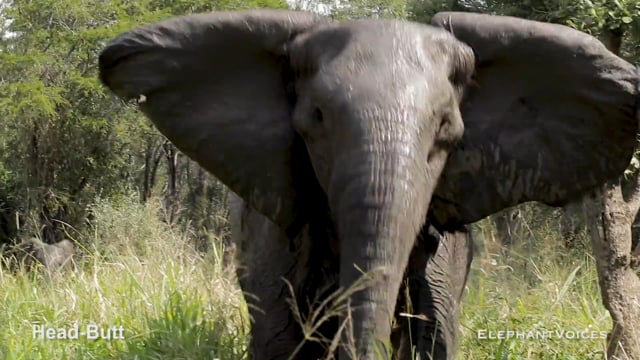