A mutual entwining of trunks. Trunk-Twining occurs in Social Play as a gentle contact form of Sparring, during which two elephants slowly and sinuously intertwine their trunks in a spiral. Trunk-Twining also occurs during Coalition Building and Affiliative contexts during High-Fiving and in a range of Bonding-Ceremonies between adult females, where the action can be more sudden and dramatic. In some cases the intertwining of trunks can be more like a sudden clasping of another’s trunk.

Adult males gm0016 and gm0049 are Sparring and are seen to engage in following behaviors: Trunk-Twining, Trunk-to-Mouth, Allo-Check-Tusk (both to the other several times), Touch-Self, Touch-Trunk-Tips. (Gorongosa, Mozambique)

Adult males G7 and gm0016 are engaged in a long Sparring match. This clip includes a section of it in which they engage in Trunk-Twining. (Gorongosa, Mozambique)

Three calves are playing together. In the foreground is a 4.5 year old female (right) and a 2 year old male (left). They stand face to face and Trunk-Twine. The male then Touch-Self as the female stands in a with a Periscope-Trunk expectant pose waiting for him to re-engage. He does and they stand in a Reciprocal-Open-Mouth as they gently Spar. (Maasai Mara, Kenya) 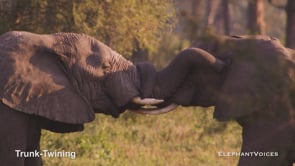 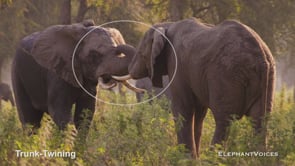 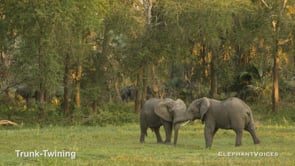 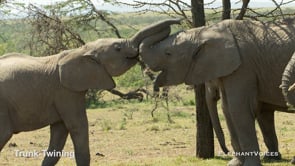 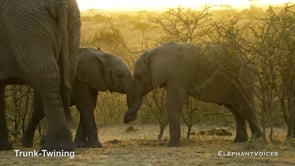