Reaching of the trunk to touch or near touch, or place into the mouth of another. Trunk-to-Mouth is a very common elephant behavior and occurs between elephants of all age/sex groups in a broad range of contexts.

In a Coalition Building context, Trunk-to-Mouth as well as Reciprocal-Trunk-to-Mouth is commonly observed when elephants bunch together to face off a common threat and appears to function in reinforcing bonds and reassuring one another.

In a Calf Reassurance & Protection context, Trunk-to-Mouth is a common component of Caressing behavior displayed by mothers and allomothers toward infants and calves during care, reassurance and protection. Mothers may also use Trunk-to-Mouth to get the attention of infants before moving off or in an attempt to Guide them toward or away from something. In some cases mothers use an exaggerated movement in which they touch the infant’s mouth and then drawing the infants head up and in the correct direction by sliding the along the underside of the infants trunk. A mother may also cover the mouth of a crying infant with her trunk fingers as if to console.

In a Calf Nourishment & Weaning context infants and calves use Trunk-to-Mouth to Solicit-Food from their mothers or others.

The above is a cursory description of one of the most quintessential elephant behaviors and much research is needed to understand the full function of this gentle gesture.

Pascal has just arrived in the ND family where Nastya is in estrus. He is walking toward her when another juvenile female, Ndebele, stops and turns to greet him Trunk-to-Mouth. He reciprocates. She seems excited by her greeting and Head-Waggles - almost a Head-Shake and they continue on their way. (Amboseli, Kenya) 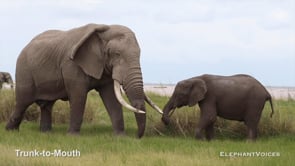