Placing the trunk over the head of an opponent and pushing down. This behavior is observed during Social Play and in Escalated-Contests and is a common tactic in Sparring matches. It tends to be performed by males of all ages.

In what appears to be an act of Conciliation gm0009 touches the smallest male, who seems to Rump-Present and gm0009 leans into him and touch him Trunk-to-Genitals. Then the male with the broken hind leg Reaches-Over the male in the middle, while the male on the right engages in a Trunk-Push-Down. Then both step back and Trunk-Suck. After gm0009 appears to touch the middle male Trunk-to-Genitals. (Gorongosa, Mozambique) 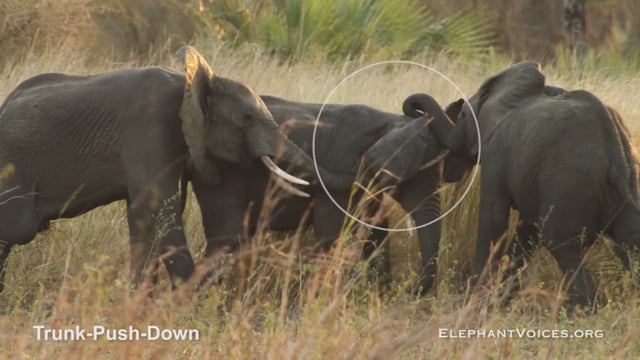