Grasping and lifting or uprooting vegetation, a rock or other object with the distal portion of the trunk and using movement of the entire trunk to throw or fling (underhand) the object in the direction of an opponent or predator. This behavior may also be observed in Social Play. An elephant's aim can be very accurate even at some distance. All age/sex groups except infants may be observed to Throw-Debris.

Juvenile elephants are engaged in exuberant play of Imaginary Enemies and general cavorting about in the long grass. They have been Pulsated-Trumpeting for a while. Notice the antiphonal nature of these calls one calling and then another, as they seem to rev one another up. The contagious nature of Pulsated-Trumpeting during this type of play is typical. In this clip the female closest to us finds a large stick which she picks up and throws twice high into the air, then she carries it about for a bit waving it in the air. (Amboseli, Kenya) 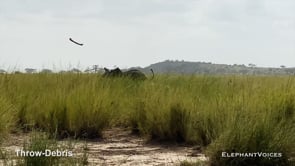