Ten year old Qaskazi joins matriarch Qoral and her infant at a mud wallow. Qaskasi is very eager to take care of the infant and Qoral doesn't want her help. Qaskazi has been bothering her and does so again here. She walks up and then turns to Rump-Present and then as if to get Qoral's attention begins Tail-Swatting her. Having watched her do this over the course of the morning and knowing the drama that takes place later, I think this is a bit like 'hey, hey, I am here, can't I please look after the baby, please, pretty please.' (Amboseli, Kenya) 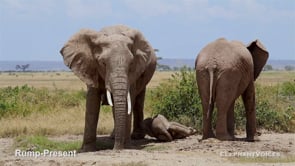