As the clip starts we see an adult female starting to walk into center frame. Then a young male walks into frame from the left. As the young male approaches the female turns quickly to Rump-Present to him and he reaches Trunk-to-Genitals to test her. As a second female walks into frame we can see the male performing Flehmen. (Gorongosa, Mozambique) 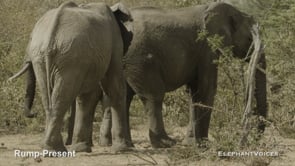