A young male (center right) is minding his own business at a water-hole. An adult female approaches and stands next to him (center left); he Orients-Away slightly. She comes over and stands near to him waiting, and exhibiting Foot-Lifting. As he Orients-Toward her a little she turns on him, Ramming, Pushing him with her Trunk and Tusking him with an audible sound and then reaching her trunk out at him as he Retreats-From and Looks-Back. She Ear-Folds and Ear-Slaps loudly - dust flying. (Maasai Mara, Kenya)

Adult female Walli has two calves, a male aged 5 and an infant female. Unusually, Walli has not weaned her older male calf and he is very jealous of his younger sister. Also, unusually, Walli does not intervene to control her son's aggressive behavior.

The clip starts with the male on one side and the infant on the other. Both are Suckling or attempting to Suckle. The infant Roars (can't see the cause) and about the same time Walli uses her hind leg to try to block the older calf from Suckling in a Reject-Suckle. The male then moves quickly around the back of his mother to try the other breast and the infant female, noting his movement, runs forward out of the way. The male Suckles briefly but seeing his sister hovering ahead of his mother, he Runs-After, Ramming her, knocking her over and Tusking her while she Roars. He tries to hold her with his trunk while continuing to Tusk her in an extremely aggressive manner. His mother and an allomother arrive but, again unusually, do not really intervene to help the infant. (Maasai Mara, Kenya) 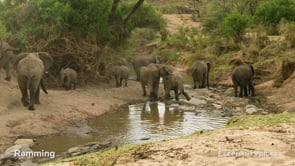 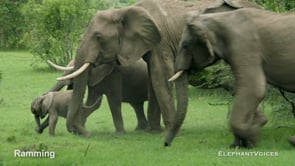