There was tension around an estrous female and two males began an Escalated-Contest which lasted close to 4 hours. During this period they engaged in 3 bouts of Dueling.

This clip is a section of the second bout of Dueling. As they are about to clash they stand facing one another Chins-Out, Heads-High and then Tusks-Clank as the longer tusked males Lunges at the broken-tusked male Pushing him back. They separate and both engage in Check-Tusk as they examine whether their tusks have been damaged. (Amboseli, Kenya)

In this case Ozora is in estrous and being lightly Guarded by Liaqat. A young male, about 15 years old, smaller than her and perhaps 15 years younger, is interested in her and, perhaps frustrated by her lack of interest in him, becomes aggressive. We use the term aggressive Sparring, but if one studies the behavior this is closer to Dueling. Ozora is angry at him Ear-Folding and Ear-Slapping and holding her Head-High and Chin-Out. She Backs-Away and he Advances-Toward her. She again Ear-Folds and Ear-Slaps with Head-High and Chin-Out. She Backs-Away again and he presses his advantage. Ozora Lunges at him and they clash tusks. She Reaches-High, and Lunges at him clashing tusks again. She adopts Circus-Pose and Lunges again then as he Backs-Away she Reaches-High again. She Advances-Toward him Ear-Folding and Ear-Slapping as he Backs-Away. (Amboseli, Kenya)

There is tension around an estrous female. A new medium sized male has just joined the group and a second medium sized male with two broken tusks has taken exception to his arrival and threatens him Ear-Folding and Advancing-Toward him. As this clip the two males stand facing one another Head-High and Ears-Spreading. They make contact and Tusk-Clank. The male on the right Lunges at the male on the left and forces him back. (Amboseli, Kenya) 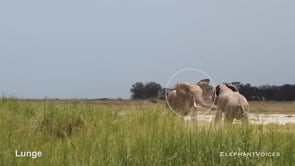 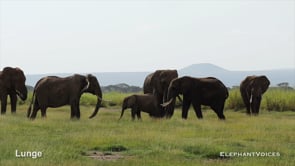 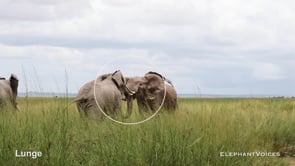 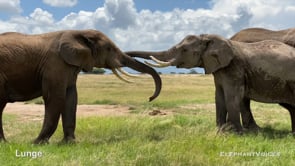 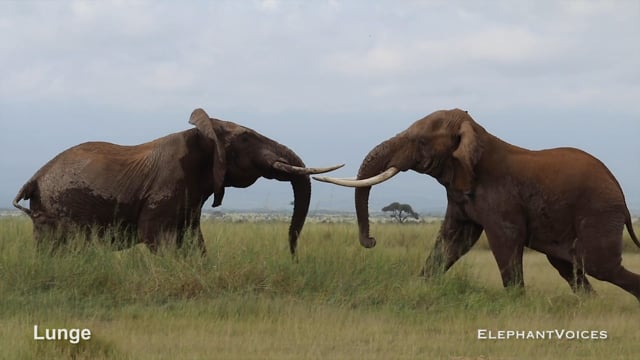