Reaching out horizontally with a full extension of the trunk to inspect a nearby object or scent that the elephant apparently does not wish to approach closer. The elephant typically stretches its body in the direction of interest and then elongates its trunk several times to its fullest extension. The manoeuvre appears to take some effort on the part of the elephant, as it does not seem to be able to maintain this full extension for more than a few seconds.

This behavior occurs in the following context(s): Attentive

A young male reaches his trunk toward the film car presumably to sniff. (Maasai Mara, Kenya)

A young male walks along the edge of a water hole sniffing the ground as he walks. He pauses to look at us and reaches his trunk toward our car - presumably to sniff us - in a Horizontal-Trunk position. (Amboseli, Kenya) 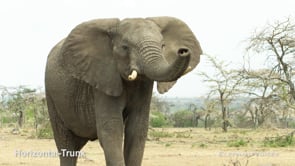 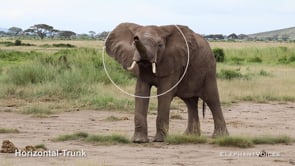