Waggling of the head from side to side. This behaviour is observed during Social Play as a component of Solicit-Play and Sparring-Initiation and is associated with Lone and Object Play when an elephant considers an object of play. Head-Waggling may also follow a period of Contemplation, when the behavior appears to be an outward expression of internal thoughts and feelings. Head-Waggling may be observed in all age/sex groups, though most often in younger individuals.

C family calves are feeding side by side. Watching the littlest calf biting off vegetation, the four year old calf in the middle Head-Shakes. This is followed by a Head-Shakes by the far calf and they begin to play. Although there is no audio on this clip which was originally slo-mo, the littlest calf would have heard the Head-Shakes, and she Head-Shakes, too. Is this an example of Contagion? (Gorongosa, Mozambique)

Three calves <2 years old are at play. A male (back left) reaches his trunk over (Reach-Over) the calf closest to the camera, but this male moves away and the male Mounts the other calf instead. As the calf in the foreground contemplates the situation he Head-Waggles. (Maasai Mara, Kenya)

As a one year old female calf approaches and investigates the car she playfully Head-Waggles. (Maasai Mara, Kenya)

Several calves are at play. The first, a female, calf walks through frame Head-Waggling and is followed by a < 1 year old male who Head-Waggles as he almost dances along. He Pirouettes to Orient-Toward another calf and adopts an expectant posture - Ear-Spreading and ready to lunge forward. A third, male, calf comes into frame and the two Push one another then run along together. (Maasai Mara, Kenya)

Two males are engaged in a Sparring match. A young male watches them and then Head-Waggles as he approaches them to join in their game. (Gorongosa, Mozambique)

Families of elephants are at KH4 water hole and many are playing. Calves Spar. An adult female Head-Waggles as she waits for another to approach her. A juvenile female Head-Waggles back but walks past her and then approaches us Head-Waggling and gives a Nasal-Trumpet. She stops to consider us. (Amboseli, Kenya) 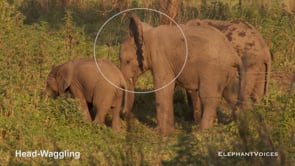 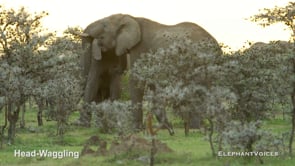 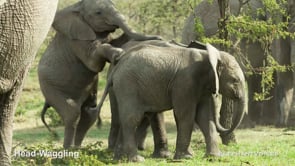 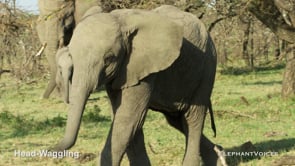 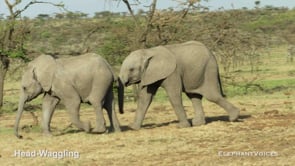 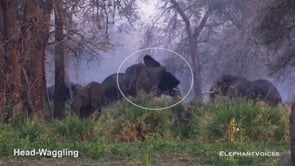 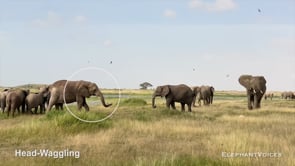