A medium sized adult male has been engaging in Tusk-Ground for more than 2 minutes. He comes out and gives a Head-Toss. (Amboseli, Kenya) 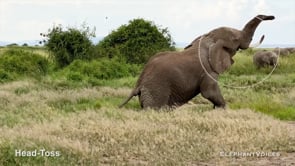