A sharp and sudden swinging or tossing of the head and tusks down, up and sideways, to threaten or hit an elephant by its side who is either too close or doing something that displeases the elephant. Often seen in competition over resources such as an older calf Begging for food or attempting Food-Stealing from its mother, or other, or at a salt lick or small water hole. (Previously referred to Head-Swinging a term now used for a different behavior.

Grumpy Grandma, f0412, and V-Notch (her daughter) are feeding on a bush. V-Notch is closing in on the spot where her mother is feeding. Eventually Grumpy Grandma Head-Swipes her gently out of the way. This is the third time; V-Notch is persistent and comes right back in. (Maasai Mara, Kenya)

This is part of a long and interesting sequence of behavior. In this clip Nalakite is feeding on a branch. Her 6 year old son approaches her and Solicits-Food reaching his trunk up to try to take her branch. She gently Head-Swipes him away and he gives a Grumble-Rumbles. (Maasai Mara, Kenya) 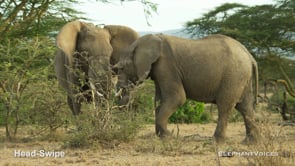 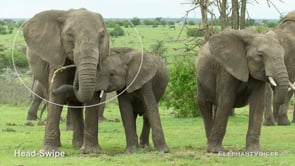